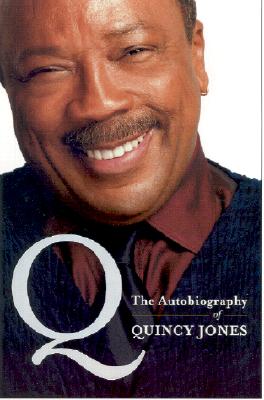 Read a Description of Q: The Autobiography of Quincy Jones

The new book, Q: The Autobiography of Quincy Jones reads almost like a fable or a fairy tale. The young Quincy Jones, with his twinkly eyes, wavy hair and killer smile was the epitome of a handsome devil. But his good looks and carefree manner masked a horrible childhood with a severely schizophrenic mother, a loving but clueless father, and out and out evil stepmother. Jones soon discovered a lifelong refuge and soul mate in his love for music -- a passion so consuming that he can not get a driver's license because his mind is always composing a new musical passage, preventing him from concentrating on traffic.

In his efforts to escape his abusive home life the 15-year-old Jones came close to being selected to tour with Lionel Hampton's band. Jones bares his soul, accurately recollecting his youthful yearning: "The average age of Hamp's band was thirty years old’If Hamp had asked me to jump out the window at that moment to join his band, I would have. I sat up straight and tried my best to look thirty years old. I wanted it. I willed it. I visualized it with every inch, every pound of me, c'mon, man’"

Jones soon gained entr’e into his dream world of music. He has worked in all aspects of music (horn player, record producer, bandleader, and composer), but it is as an arranger - the thinking behind the music -- where he distinguished himself and built an impeccable reputation. His excellence, open attitude, high standards, work ethic, and love of music made it possible for him to associate with, and be respected by a wide spectrum of movers and shakers, from Frank Sinatra to Steven Speilberg, from, Nelson Mandela to Tupac Shakur.

At this point Q gets into high gear and never lets up, providing fascinating and funny recollections on the jazz elite (Miles, Dizzy, Bird), entertainment royalty (Sinatra, Tina Turner, Michael Jackson), classical music icons (Leonard Bernstiein, Nadia Boulanger), the big band era (Basie, Hampton and Ellington), songbirds (Ella, Dinah, Sassy), and many others. Q is truly a "Who's Who" of latter 20th century music and entertainment.

One of the biggest enjoyments offered by Q is the way Jones describes music -- like sharing a passionate personal conversation with a good buddy. Instead of saying that a tempo was precise and deliberate he says, "You could shave between the beats". In describing Dinah Washington (one of his many love affairs), rather than saying that she was an exceptionally versatile vocalist, he states: "She could do something a lot of singers then and now could not do: She could take the melody in her hand, hold it like an egg, crack it open, fry it, let it sizzle, reconstruct it, put the egg back in the box and back in the refrigerator, and you would have still understood every single syllable of every single word she sang".

In retelling conversations Jones doesn't just relate what occurred but pulls readers right into the time and place. He recalls the popular slang of the day, when Lionel Hampton refers to Jones as "Young Huss". The most creative and talented writers can not conjure up this kind of authenticity. It must come from the heart and mind, and it is this kind of realness and detail makes Q as high in quality as it is delightful. The book has an extensive index, a comprehensive discography, and three photograph sections, all of which contribute mightily to its overall service and appeal to readers.

Despite the fabulousness of his career and the sumptuousness of his current exalted status Jones is not someone for whom life was a crystal stair. He is honest about his womanizing, which understandably contributed to the failure of his marriages. His schizophrenic mother literally haunted and bedeviled him all his life. A brain aneurysm necessitated two life-threatening surgeries in the 70's. But Jones hit these sour notes very lightly. As a poor struggling youth he would simply ignore problems. As a man of wealth he throws money at them. There is no discussion of the controversy surrounding the movie, The Color Purple, or the 1990's flap over a greater African American presence in films.

One of Jones most bitter disappointments occurred when he was stranded with out gigs and finances in Europe in the late 50's and was responsible for 30 members in his big band. "I had all of these people dependent on me. I was completely distraught and overwhelmed. For the first and only time in my life, I contemplated suicide. I wanted to be outta there. I just wanted fifteen or twenty minutes of peace." This experience left him deeply in debt. In order to pay the bills he took a gig as a producer of pop songs for Mercury records, producing "It's My Party" and other hit records for 60's singing sensation Lesley Gore.

The biography has a structure that parallels life and music. It is seemingly linear, but upon closer observation it takes spirals, gallops, scallops, zigzags and other detours. Many of the chapters in Q are penned by Jones' friends, former wives, business associates, and children, and offer refreshing perspectives and a change of pace from Jones' point of view. These guest writers are very honest about Jones' shortcomings, but not unkind. Jones was a loving, but detached father because he was so poorly parented himself. Daughter (with Mod Squad actress Peggy Lipton), Rashida states: It's a great testament to him and to [his] ex wives that he has seven kids and we're not all [mess]ed up. We all work. We have jobs. We live. We all love each other. We're normal people who have lived atypical lives."

Interestingly, for someone who is so consecrated to his music, Jones is not head-in-the-clouds about his "art". He preaches valiantly on why artists and musicians must also develop business acumen. His experience selling the rights to his songs and then having to buy them back at ten times what he paid was a painful experience that burned this lesson into him. He subsequently became a master of the universes of music, films (The Color Purple), television production (The Fresh Prince of Bel Air), and publishing (Vibe Magazine).

An especially funny and insightful chapter concerns Jones producing the song, "We Are The World" and how he managed the several dozen superstars who participated, coining the phrase "Leave your ego at the door". He offers valid and practical observations on people management and how he overcame problems with production and with persnickety recording artists. (His description of the reaction of a country singer who was asked to sing the chorus in Swahili is a howl.)

Currently Jones has attained a level of prominence and abundance where he commands jets and flies to other parts of the world at a moment's notice. His life is rich in accomplishments, money, superlative experiences, and in people. Q will leave readers with a good taste and despite the book's minor flaws and Jones' personal failings readers will be happy for his success, and will be enhanced by taking this journey with him.

Q is an almost perfect autobiography. Everything is there in just the right amounts, including excitement, guidance, failures, wisdom, pain and joy. In keeping with the fairy tale perspective of Jones' life his closing words offer this advice on how to live happily ever after: "You don't have to let suffering define your experience of life, and you don't have to pass it along to others just because it hurts. You learn and grow from it -- you teach your pain to sing. You let the light wash out the darkness."

Read Doubleday’s description of Q: The Autobiography of Quincy Jones.