Book Review: Do You Speak American? 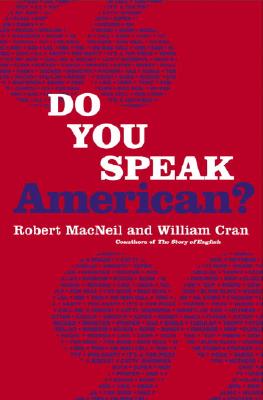 by Robert MacNeil and William Cran

Read a Description of Do You Speak American?

"It is one of the paradoxes of American life that white America both is fascinated by black culture and disapproves of it, embracing it and bad-mouthing it simultaneously. Even as it borrows, however, white America continues to bad-mouth the source, the dialect that linguists call African-American Vernacular English. Yet this is the speech of millions of Americans in inner cities all over the United States, a speech that is remarkably consistent from place to place, more consistent than the speech of white Americans from city to city."
’Excerpted from Chapter Six

Given the pervasive influence of such modern inventions as television and radio, and the pressures to conform exerted on each successive generation by standardized testing, it is logical to assume that the American language would be turning into a flattened-out, standard English as ubiquitous in nature as McDonalds and Walmart. This was the rebuttable presumption of wordsmiths Robert MacNeil and William Cran, co-authors of The Story of English back in 1986.

Recently, the pair collaborated again, setting out on a journey criss-crossing the United States, fully expecting to learn that overexposure to shared information would have completely homogenized the populace. But lo and behold, they discovered just the opposite, namely, that our different dialects remain stronger than ever.

They filmed their surprising findings and presented them on PBS recently in a program entitled, "Do You Speak American?" And now, they've published a companion volume of the same name, sharing a plethora of fascinating factoids about the state of this nation's language.

For instance, they say that the Southern is the fastest growing accent, with the once-reviled drawl coming into fashion for its folksy, down-to-earth quality. Plus, the authors admit that having three of the last five Presidents hail from the region has helped considerably. MacNeil and Cran also claim that women play more of a role in the evolution of speech patterns than men, and that females tend to be a whole generation ahead of males in adapting to revised pronunciations.

Hispanic immigrants are apparently assimilating at the same rate as ever, with it taking about two generations before a family loses the ability to speak Spanish. As for slang, it apparently enriches, rather than corrodes the culture, with African-Americans having supplied over 1700 generally acceptable words to the mainstream culture.

For all our differences, Do You Speak American? repeatedly drives home the point, in a very convincing, informative and entertaining fashion, that this patchwork quilt of a language we share binds us to each other more than we'd ever suspect.

Read Nan A. Talese’s description of Do You Speak American?.