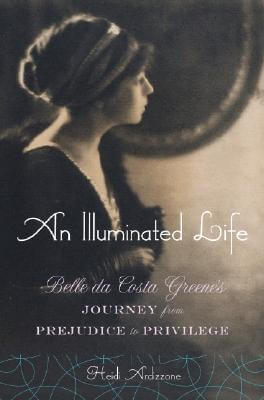 Read a Description of An Illuminated Life: Bella da Costa Greene’s Journey from Prejudice to Privilege

’Princeton University was a particularly interesting place for Belle to first be on her own and living as white... Princeton was culturally very southern despite its northern location, and the university was largely responsible for this.

Throughout the 19th C. Princeton had drawn its upper-class male student body, as well as much of its faculty and administration, primarily from the slaveholding South’ Students even brought slaves with them as personal servants during their school residency. Moreover, Princeton was the only Ivy League school that had not begun to admit any African-American students by the turn of the 20th C.
In Princeton, segregation was institutionalized in practices of discrimination and exclusion’ hotels and restaurants barred African-Americans' African-American children could only attend a black grammar school; there was no black high school. In other words, Princeton operated with exactly the kind of two-tiered racial segregation that made it virtually impossible to maintain a mixed-race identity in public’

[Therefore] living in Princeton would have tested any continued connection [Belle] may have felt with the black community. ’
’Excerpted from Chapter Three, Princeton (pgs. 65, 66 & 69)

Most African-Americans of my generation were raised with whispered rumors about light-skinned relatives who had opted to pass for white. Sadly, due to the United States' virulent strain of racism, this often meant that one might never see or hear from that crossing over sibling, cousin, son or daughter again, given the sick society's strictly-enforced system of segregation For this reason, a book like the aptly titled An Illuminated Life represents a priceless addition to the annals of African-Americana, for it represents a very revealing and detailed biography of a woman who made just such a daring transition. Belle Marian Greener (1883-1950) was born in Washington, DC to parents who were both black. Her father had been the first African-American to graduate from Harvard while her mother hailed from a prominent black family which had been emancipated for generations.

It is important to note that during Reconstruction and the 1880's [black people] had faith that the race would be assimilated into white society. Thus, the dramatic rise of racism in the 1890's came as a great shock to the black elite.  Since Belle came of age during that repressive era of redneck backlash, the country's sudden reversion to an ante bellum agenda helps explain her behavior when she came of age to move into the world on her own.

Changing her name to Belle da Costa Greene, she proceeded to claim to be part Portuguese, as a means of explaining her olive complexion. She moved to Princeton, New Jersey where, now as a white woman, she landed the position as a librarian which would lead to an enviable career as the curator of the manuscript collection of industrialist J.P. Morgan, who had amassed a fortune as a Civil War profiteer.

Author Heidi Ardizzone, Professor of American Studies at Notre Dame, does a marvelous job of making her mysterious subject come alive here, given the dearth of material available. For Belle was understandably furtive about her life, ’’destroying personal papers’’ and ’’maintaining different public and private personas.’’ Though she never married, she is known to have kept the company of several very powerful men considerably above her station, and to have felt very comfortable moving among New York City's wealthy and well-connected. One can only imagine how much more bohemian Belle might have blossomed and indulged her glamorous side, if she didn't have to look over her shoulder constantly, wondering whether her roots might come back to bite her.

Simply, a fascinating must read.