Book Review: More Than Just Race: Being Black And Poor In The Inner City (Issues Of Our Time) 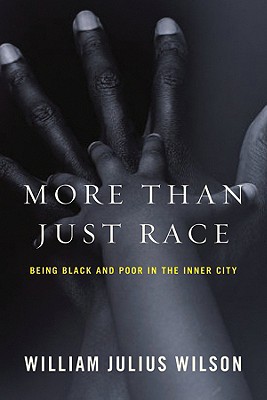 Read a Description of More Than Just Race: Being Black And Poor In The Inner City (Issues Of Our Time)

’This book will likely generate controversy because I dare to take culture seriously as one of the explanatory variables in the study of race and urban poverty’a topic that is typically considered off-limits in academic discourse because of a fear that such analysis can be construed as ’blaming the victim.’ Nonetheless, I hope I can convince the reader of the urgent need for a more frank and honest discussion of complex factors that create and reinforce racial inequality and to rethink the way we talk about addressing the problems of race and urban poverty in the public policy arena.’
’Excerpted from Chapter One (page 4)

Although this much-ballyhooed book arrived with a lot of fanfare trumpeting it as introducing a new ’holistic approach to race,’ quite frankly, I found it to be a rather blah rehash of old wine in new wineskins. Quite simply, in the Age of Obama, you're actually going to have to come up with truly fresh ideas to earn this critic's stamp of approval as an innovator.

Written by William Julius Wilson, Professor of Sociology at Harvard University, More than Just Race fails at every turn to offer the reader much meat to sink your teeth into. The author's basic thesis, introduced early in the opus, is that, traditionally, there have been a couple of competing theories in terms of the ongoing plight of the black masses mired in poverty in the nation's inner cites.

One explanation blames ’structural’ forces or institutional aspects of the social networks inside our economic, educational, employment, criminal justice and other systems for the stratification. The other indicts ’cultural’ factors, looking at dysfunction in African-American culture itself for answers. The latter approach has generally been dismissed by most left-leaning academics for the ’blaming the victim’ mentality underpinning the philosophy. Wilson has nonetheless decided to employ both avenues, including the cultural which some have labeled ’laissez faire racism’ because of its eagerness to make slum dwellers responsible for their predicament.

Tepid in tone, this tame tome has just five chapters and focuses fairly narrowly on three issues: the financial straits of the black male, the fragmentation of the black family, and the forces contributing to the concentration of poverty in the black community. Wilson's conclusions are invariably uninspiring. Trust me, it's hard find a more vague summary on the subject of African-Americana than Wilson's here, which reads: ’We can confidently state’ that regardless of the relative significance of structural and cultural factors in black family fragmentation, they interact in ways far too important for social scientists and policy makers to ignore.’

Read W. W. Norton & Company’s description of More Than Just Race: Being Black And Poor In The Inner City (Issues Of Our Time).