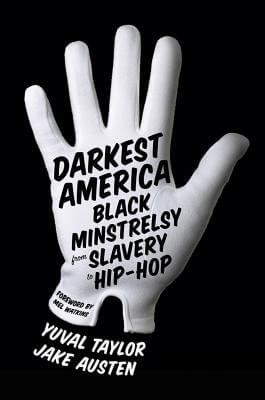 by Yuval Taylor and Jake Austen

Read a Description of Darkest America: Black Minstrelsy From Slavery To Hip-Hop

In a landmark volume on cultural stereotypes, Yuval Taylor (Faking It) and Jake Austen, the editor of Roctober Magazine, detail the history of the significance of black minstrelsy. Although the authors uncover the historical and theatrical influences which created the popular musical form in its golden era from the 1850s to the 1890s, they also celebrate the ingenuity of stellar performers such as Billy Kerands and Bert Williams, who donned the burnt cork face and tattered threads and elevated it to an art form.

The minstrelsy virus quickly spread throughout Hollywood in both silent films and talkies with many of the leading white stars dancing and mugging in blackface. Fans of the minstrelsy could also point to trendy colored stars without the corked mugs like Stepin Fetchit, Willie Best, Mantan Moreland, plying out its old caricatures. Notably, the authors stress the subsets of the minstrelsy: the Tom, the buck and the trickster, all of which are with us today on the big screen and on TV.

According to Taylor and Austen, black minstrelsy is described as “not only stereotypes and caricatures, but comic traditions, linguistics, low humor, verbal dexterity, improvisation, and numerous other elements.” The book tightens its focus when the writers discuss the importance of sitcoms like Good Times, Sanford and Son, and The Cosby Show, which went against the customary norms of the concepts of acting niggerish and provide some sense of humanity to black characters and themes.

Well documented and very comprehensive, Taylor and Austen are at ease discussing the artistry and social traditions of the Zulu Krewe at the Mardi Gras carnival from the zaniness of Harlem Renaissance writer Zora Neale Hurston to the rich hip-hop clowns Flavor Flav and Lil Wayne. However, pay attention to the astute analysis of Tyler Perry’s commercially profitable films and plays which are an offshoot of the low brow theatre vehicles from the “Chitlin Circuit” pipeline. The writers also zoom in on one of the most satirical, articulate Spike Lee films, Bamboozled, a modern take on a latter-day minstrel show.

Remove the blackface, the yuk-yuks, shabby rags, and shuffling, and a craving for watermelon and yardbird, and still the concept and themes of minstrelsy are there in our mass media. Black folks endure this madness every day. We honor Taylor and Austen for giving this informative update on what the minstrelsy virus has done to past generations and is doing to us now as a community, both culturally and spiritually.