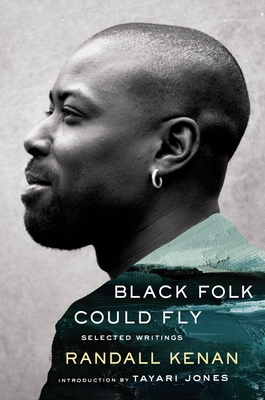 Read a Description of Black Folk Could Fly: Selected Writings

Some of our literary greats fly under the radar. The unexpected death of the late great author Randall Kenan in 2020 at age 57 brought him well-deserved attention and sent readers scurrying to find works by “this country boy and man of the world.” Along with the treasury of books by Kenan, a posthumous collection of his writings, Black Folk Could Fly, has emerged as a final celebrated tribute to the author, who has earned a Guggenheim Fellowship, a Whiting Award, and the John Dos Passos Prize.

A Brooklyn native, Kenan was sent to a small town to live with his grandparents, who ran a dry cleaning business, in rural North Carolina. His grandmother taught kindergarten, providing his inspiration for books and storytelling, while his granddad had a profound influence with “his wisdom forged in hand-in-hand combat with life.” Young Kenan learned from him about the jazz legends: Wes Montgomery, Lady Day, Sarah Vaughan, and Dinah Washington. On weekends, his great-aunt, Miss Mary would take him to their family farm in nearby Chinquapin. It was a “small unincorporated village with tobacco fields, cornfields, and hog farms.” Later, this southern experience would furnish the backdrop of his fictional town, Tims Creek, in his award-winning 1989 novel, A Visitation of Spirits and the 1983 story collection, Let The Dead Bury The Dead. And now with this newly released book, he returns to his familiar themes of traditional southern life, home-cooked food, literature, sex and morality, American history, and most importantly, his revelations of his bloodline.

In these 21 fascinating essays in this publication, the reader sees a man who confronted conflict and challenges, while celebrating his undying affection for the people who raised him. He lets all things southern sink into his soul. Even in his title, Black Folks Could Fly, he doubles down on the old African-American folktale of the Africans who flew back to the Motherland after the cruel slave ship arrived in America. As a serious foodie, he savors those delicious home-cooked dinners of fried chicken, cornbread, slaw, potato salad, rib eye, pork ribs, and hushpuppies.

In Kenan’s prophetic letter to his godson, he does not mimic the noted Baldwin’s “Letter From A Region Of My Mind” or Ta-Nehisi Coates’s “Letter To My Son,” instead of harping on years past but rather heightening the present with all of its cultural dimensions and future reckoning: “Black folk are no longer the great minority in this nation, and our continued enduring and prevailing rest with an understanding of how we fit in the new demography. History, alas, does not privilege the people on the side of right; history never does. Might is not always right; but knowledge will always defeat blunt force in the end. Know the past, learn from the past, but don’t be a slave to it: keep moving forward.”

With his frank “Scuppernong And Beef Fat, the author recalls the three things the women folk gave him: a love of food, an instinct toward compassion, and a love of words and story. Also, Mama made a wine from the “mischievous” scuppernong grapes, a sweet but potent beverage. Other than spotlighting the locals and his assorted family members in many of the essays, Kenan talks about his cousin Seymour and other great cooks doing their magic around the pit in his “Comfort Me With Barbeque” He writes: “The meat was so tender it melted upon the tongue.”

Writing was his passion. In “Ghost Dog,” he mentions Toni Morrison’s influence on his work, citing her explorations in “personal and family dynamics and matters of the heart and soul.” He was also impressed with her world almost devoid of white folk. But it was Columbian writer Gabriel Garcia Marquez that enchanted him with his scenes of magic realism, as well as the work of Faulkner, Woolf, and Hemingway.

Kenan loved the unique “Catwoman” actress Eartha Kitt, being mesmerized from his childhood with oversized TV persona: “Kitt never seemed to misrepresent where she came from, or shun it, but rather her humble Southern beginnings became a significant part of her myth: She wanted people to know she started dirt poor in the Jim Crow South…Kitt in fact was representative of a long line of Southern artistes who, in the face of white supremacy, used to intellect, style, and enterprise to achieve, to achieve, to overcome.”

Kenan combines the artistry of James Baldwin and Ingmar Bergman in his commentary, “The Good Ship Jesus,” with the Harlem prophet commenting on the filmmaker’s expert use of women, his fetishes with time and death, the nature of illusion, the comedy of human entanglements, the nature of egotism, the price of art. On the other hand, he noted that Baldwin made everything and anything about America’s dilemma with race. Finally, Baldwin said he envied Bergman after a visit for a 1959 magazine interview.

Often, the writer can be startling in the current events of the day: “The world is dark. The world is ugly. The world seems unyielding. That work can be hard on the back, but it’s worth the effort.”

His honesty can be jarring as well, such as in his “Letter To Self:” The world is going to change in many ways for the better for black folk and queer folk. However, ways of looking at Black men, despite our achievements and accomplishments in the great world, will remain a vexing thing. So much of how the culture at large looks at the Black man and its view of what a “man” should be is pure fantasy. A lot of this claptrap is designed to hurt you and to cut you down. To keep you in a box. To tell you what you should and should not do. Later, for all that noise, brother.”

Imagine Randall Kenan was serving you a sumptuous down home meal at a dinner party with wise talk, ribald jokes, and very human truths. That is the sum and total of this final gift from the bold, reflective bard of the South. We need more books like Kenan’s farewell salute, Black Folk Could Fly. He spares us nothing.