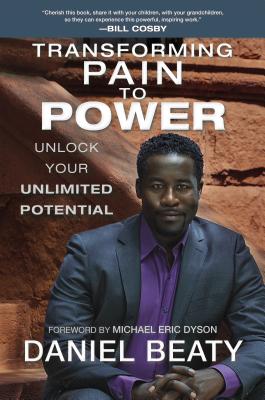 Read a Description of Transforming Pain To Power: Unlock Your Unlimited Potential

“I grew up in Dayton, Ohio in a home scarred by addiction and incarceration. For most of my childhood… I thought chaos, bondage and sadness were the norm … My concept of who I could be in the world was greatly influenced by the men in my house…

My father was a heroin addict and dealer… and my older brother followed in [his] footsteps, becoming addicted to crack cocaine and spending time in prison as well…

My life has been graced with the appearance of ANGELS who have led me through moments of intense darkness and empowered me to realize my potential… In this book, through memoir, poetry, character monologues, recovery technology, exercises, and statements of affirmations, I intend to share all that I have learned with the goal of empowering people to create the lives of their dreams.”
—Excerpted from the Introduction (pages 4-6)

By any measure, Daniel Beaty had a pretty challenging childhood, starting even before his birth. He was almost born in prison, when his very pregnant mother was busted for possession of his dope-dealing dad’s heroin. She eventually had to raise him all alone when his trifling father finally abandoned the family after ping-ponging back and forth between home and the slammer. Fortunately, while in the third grade, Daniel’s teacher played a video of Martin Luther King delivering his “I.Have a Dream” speech. The historic address had a salutary effect on the young lad in need of a positive role model. Right then and there, a seed was planted which put Daniel on a path to transcend his tragic circumstances.

That journey would include a BA in English and Music from Yale University and an MFA in Acting from the American Conservatory Theater. Today, he’s quite an accomplished poet, playwright, actor, singer and motivational speaker.

And he’s also the author of Transforming Pain to Power: Unlock Your Unlimited Potential, an uplifting opus which is as much an autobiography as it is a positive thinking, self-help tool. Underpinning this tough love tome is a simple enough basic philosophy, namely, “No matter who you are, where you are, or what you’ve been through, there is a power within you that is the unlimited potential to create, do, or be anything.”

Besides the author’s heartbreaking life story, the text is filled with interactive exercises from role play to affirmations (“I am worthy of my dreams.”) to fill in the blanks (“My purpose is to become_____”). Thus, the emotionally-engaging pages don’t permit the reader to be passive.

An inspirational, practical and mind-expanding tool designed to instill the optimistic message that any soul, however traumatized, still has a chance of healing, thriving and becoming a productive member of society.