Book Review: It Begins With Tears 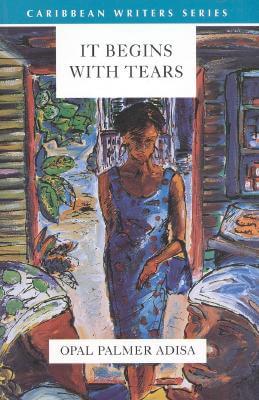 Read a Description of It Begins With Tears

From Montego Bay (a.k.a. MoBay), Jamaica to Manhattan with visits in Brooklyn, Kristoff Valley, Jamaica, and Eternal Valley, Opal Palmer Adisa's It Begins With Tears, takes us on a marvelous journey through life.  With eighteen characters in the rural village of Kristoff Village, four characters in the city of MoBay, more than nine characters in the Eternal Valley which begins and ends this novel, and references to three other integral characters, Adisa packs a great deal into a small amount of pages.  Yet one doesn't feel rushed or short-changed for detail with the massive amount of characters, many of whom are fully developed in this her first novel.

Jamaican roots
The author was born in Jamaica, educated in the United States and worked in both countries.  Known primarily for her poetry and essays, both art forms intersperse this lush novel taking place primarily in rural Jamaica.  With Afrocentrism at the core of so many novels this decade, it is refreshing to have a piece that is comfortable with its West African roots via Jamaica without overwhelming you.  There is no mention of dates in this work but some folks do have electricity, cars, indoor plumbing and telephones.  But the concept of time does not have the same importance in Jamaica as it does in the United States, so it is fitting that we don't know exactly what era we are dealing with.

We are dealing with communities which value tradition, customs, and honoring their elders and a strong current of listening to one's voices whether inner or outside through duppies (ghosts).  The resistance to folklore ways is nonexistent in these communities.  The communities are traditionally closed to outsiders but receptive when one of their own marries and brings his or her spouse to the community.  Such is the case with the principle American character, Angel, married to Rupert.  Angel never knew her roots as she was adopted at birth and unaware of the adoption until age 12.   No information was ever provided about her birth parents.  After the death of her adoptivefather, and when she began questioning her racial heritage, her adoptive mother responded by abandoning her save financially.  Never feeling at home in her place of birth, Angel welcomes a chance to go to Jamaica to look for the unknown, but to at least belong.

This sense of belonging eludes many of the characters, even those who are aware of their roots.  There is much confusion especially around Valrie and Arnella whom most folks including themselves believe to be twins as they were born on the same day, but are actually cousins.  The confusion continues when they share the same man who also impregnates them both.  Arnella, Valrie, and Godfree (their shared man) are not confused and their situation is fine for them.  But they must deal with the mores of their families and the community at large.

And of course to add to the Peyton Place like environment, we have the return of Monica to the village.  Monica has been pursuing the world's oldest profession and her return is met by glee from most of the men in the village and gossiping consternation by most of the women in the village who are insanely jealous of her.  Monica's sole female ally, her godmother, Miss Cotton, one of the elders, cautions her to be discreet in her dealings with the men folk of the village. Unfortunately Monica fails to heed Miss Cotton's sage words and is attacked by some of the women in the village.  Suffice it to say that these women start a most unusual fire in Monica's "most private parts."

Healing
Despite the goings on in the village, those of infidelity, secrets, indiscretions, abuse, and more, the women of the community bond with the formally ostracized Monica and open their hearts, souls, and secrets in a ritual healing ceremony at the river.   Forgiveness is key in this spiritual
work where no one is perfect and everyone has room for growth regardless of their past.   The keen respect of elders, ancestors, family and community are the glue of this fabric.  With a beauty in the changing of the guard as the elders and healers pass on and the new generation take their places. Parallel stories also exist in the Eternal Valley inhabited by Devil, She-Devil and their family as well as God and Sabbath Angel and their eight children.  But as is stated in the title, it does begin with tears and as is revealed in the wondrous dialect filled pages which unfold, "all life begins and ends wid tears."  But the tears are not always pain-filled, sometimes they are joy-filled and other times simply a release of emotional secrets that keep us all from really living.  This book is a refreshing addition to the Caribbean Writer Series.


Read Heinemann Drama’s description of It Begins With Tears.