Book Review: Angel on My Shoulder: An Autobiography 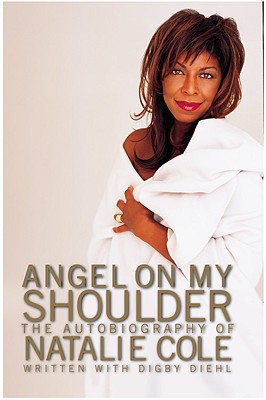 by Natalie Cole and Digby Diehl

Read a Description of Angel on My Shoulder: An Autobiography

Angel on Her Shoulder, Devil in Her Mind
Natalie Cole's autobiography, Angel On My Shoulder is one of the years' most eagerly anticipated books. Snippets in various columns, and covers on Jet and People magazines have whetted the public's appetite for a lotta dish. Does Angel on My Shoulder deliver the goods? Yes, big time!

Natalie Cole has enough adventures for 80,000 autobiographies. In the book she recounts an idyllic upbringing of fame, wealth, glamour, privilege, private schools, trips to Europe, summer camps, horses, and music. But, in contrast she also has experienced the lowest lows, the kind of life that parents warn their children against, including: drug addiction, working as a come on girl for prostitutes, spousal abuse, drug rehab, major legal problems.

Cole, the daughter of entertainment icon, Nat King Cole, rightly states that her family was regarded as African American royalty. Her father's mega star status enabled the Coles to rub elbows with the wealthy and celebrated. Nat King Cole remains emblematic of velvety, classy professionalism in song, and his catalogue of musical standards ensured that his family lived in affluence even after his untimely death from lung cancer in 1965.

After her father's death, while attending college at University of Massachusetts, Natalie discovered that she inherited his gift of song and starts singing with a series of bands. It is during her college years she also acquires a wicked taste for heroin, and later cocaine. Thus Cole can not claim that the pressures of stardom led her astray, for her drug use preceded her success in music. Cole offers very little introspection about her drug abuse. "I don't remember the exact moment when I got back into drugs, but I definitely shifted back into self-destruct mode. You know you get bored if things are going too good, so you screw things up and you start sabotaging your own happiness. Anyway, I got distracted. My focus changed and I forgot what was important." Ironically, Cole's robust good health worked against her, enabling her to maintain her habit with few ill effects

Cole established her career and amassed a list of hit songs and entertainment firsts that is as impressive as her peerless father's. Naturally as "the daughter of" she worried about being held up to her father's level of professionalism, but her legions of fans will attest that Cole has earned her place in the entertainment galaxy by her own prodigious talents. Despite her heavy drug use during these years she became a major singing star, and experienced a happy personal life with marriage to her producer and song writer, Marvin Yancey, and the birth of their son Robbie.

Interestingly Cole was religious, and reaffirmed her faith while remaining committed to drug use. She even turns her minister husband on to cocaine. Her drug abuse was an open secret in showbiz circles. She admits that she was so good at cooking the stuff she was known as the "Freebase Queen". Thus, the experience of reading Angel On My Shoulder is to be left breathless at Cole's inability to get to the bottom of her problem and to learn her lesson. She is straightforward in admitting her mess-ups, but she never seems to understand them and keeps repeating them. Finally, after a six-month stay at the Hazelden drug treatment center in Minnesota Cole's new life began.

Despite her life mismanagement there is an important message to Cole's story. She sank to the sub depths, but with determination, honesty and focus she reclaimed her career. While her recovery was an undisputed success there were still problems to overcome and battles to be fought: A painful divorce from her physically and emotionally abusive, second husband; The death of her brother from AIDS; and an ugly lawsuit with her mother.

A whole cathartic and very evenhanded chapter of Angel On My Shoulder is devoted to Natalie's conflicted relationship with Maria Cole. Their relationship had always been volatile, but the final straw was the discovery that Maria cheated her five children out of their share of their father's estate by fraudulent management of his last will and testament.

The pot of gold at the end of this long tortured rainbow is Cole's Unforgettable, With Love recording. This project combined Nat's and Natalie's voices in duets, and was a stratospheric success, critically, commercially and artistically. Unforgettable, With Love garnered numerous Grammy awards and brought Cole back into the public arena even bigger and better than before.

Angel on My Shoulder contains good tips for those interested in a music career, (for example, sing to the audience, not at them), and contains good photos and an excellent discography. While her experiences are seamy Cole's voice always sounds fresh, very natural, very much herself -- a playful, fun-loving, big sister next door.

Angel On My Shoulder is a good read, and many readers will see some of themselves in Natalie's struggles. The major lessons include the importance of forgiveness, the value of self-insight and importance of recognizing when God is talking to us. "I'm amazed at how many times I have brought myself to the brink of death in my lifetime. God was working overtime to save my butt, and I marvel that He never gave up on me." May all readers be enlightened from Cole's candor in sharing her struggles in Angel On My Shoulder. May all readers be blessed with the mercy God showered upon Natalie Cole.

Read Grand Central Publishing’s description of Angel on My Shoulder: An Autobiography.