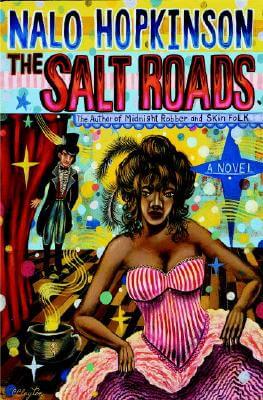 Read a Description of The Salt Roads

Award winning author Nalo Hopkinson's The Salt Roads is a multilayered fantasy full of various meanings, Haitian voodoo, mythology, slavery and European history. The reader will not walk away from this story empty handed.

The Salt Roads begins on the island of Saint Dominique (later to be known as Haiti) during an unspecified period of slavery on a plantation where we are introduced to Mer, a slave doctress. Next, Hopkinson sweeps the reader to Paris, 1842, into the life of eccentric nineteenth century poet Charles Baudelaire and his twenty-year affair with mulatto mistress Jeanne Duval, abruptly switching to Jerusalem in 300 A.D. to introduce a Nubian prostitute, Meritet.

The journey through the three worlds will be confusing at times because of the manner in which Hopkinson allows the characters to speak and the inclusion of the spirit, Ezili, the goddess of love. She uses complex framing techniques and transitions will be rough to follow. This book is not for the logical reader. There is no real plot. Hopkinson use's three dimensional narration to tell separate stories overlapped by the spirit of Ezili, who is searching to discover her nature.

The separate stories are connected through the spirit of Ezili, who is brought forth by the heart wrenching cries of three women slaves burying a stillborn. In my opinion, I could have done without Ezili, the goddess of love. She was annoying. Her naivet’ to the ways of love, which I didn't understand, I found distracting. What I loved though was the way Hopkinson's incredible writing style exposed the life of Charles Baudelaire and Jeanne Duval, the manner in which she showcased the great speculation to the religious theory of St. Mary of Egypt through Meritet and her impeccable haunting depth of the pain of the enslaved, Mer.

Any one of the stories could have been a novel itself, that's how deep Hopkinson takes you into the characters lives. They were strongly developed and tremendously personal. The common denominator of all the stories for this reviewer was sexuality and skin tone. Lots of talk about each era's perspective on skin preference and all four of the main female characters had insatiable sexual appetites. I also was fascinated by each woman's religious belief and faith. Especially, Mer, the slave and her interaction with a magical Djinni named Makandal.

The Salt Roads is not the easiest read and is definitely not for the fainthearted. There are some graphic scenes. A few others will make you cringe. So if you have a weak stomach . . . beware! Hopkinson weaves a tight spell. Her words are truly mystical. Before you know it, you might start to believe what she says and think you understand it.