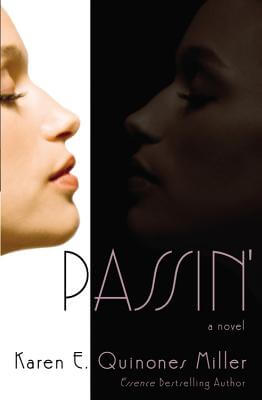 Read a Description of Passin’

Is The Grass Any Greener On The Other Side?

That is what Shanika Ann Jenkins seeks to find out as she applies for a position at a prestigious PR firm in New York City and fails to answer the race question in order to be considered for the entry-level job. After failing to be hired for the Affirmative Action slot she first applied for because she doesn't ’look Black’; Shanika returns as Nicole Jensen and purposely goes along with the assumption that she is a Caucasian. She gets the job but it propels her into the world of an African American woman who is passing for white.

Essence best selling author Karen E. Quinones Miller has written another entertaining and compelling novel that chronicles the experiences of a Black woman posing as a Caucasian in today's society. The main character finds that the sense of entitlement that comes from being the minority race in America is not worth the pain and self-loathing that comes from denying one's racial ancestry.

Nicole a.k.a. Shanika discovers that although the grass may look greener on the other side; it grows faster and higher and threatens to bury her under a mess of lies and deception that hurts those she loves and causes her new best friends to loathe who she has become. It also teaches her to value her own self-worth in the end and forces her to return to the person she was born to be. But this growth does not come without loss and pain.

Nikki, as she likes to be called was born in Detroit of African American parents. The blue-eyed blond beauty is the pride of her family, the end result of ’marrying well’ and marrying light skin Blacks with ’good’ hair. Her paternal grandmother is delighted at her birth when she is born with those characteristics unlike the other Black babies in the nursery. Her mother is insulted by the grandmother's delight and raises Nikki to be proud of her African American heritage.

Going through life in the Black community of Detroit, looking like a white child was not easy for her. Nikki's choice; much to the displeasure of her mother and her older brother Joseph who did not inherit the white side of his family tree, causes her a great deal of internal pain. Nikki does well on a professional level and also on a social level hanging out with the rich white socialites. Her mother continually advises her to come clean and admit to who she is and her brother disowns her because of her betrayal even after her mother dies in a tragic car accident.

When Nikki finally is forced to end the charade; she finds herself in dire straits due to her lies and deception. She loses a man who she really and truly loves and her white friends and co-workers are none to happy to have been fooled. I just loved this story. I read it in one day because I was just so interested in what was going to happen next. I won’t give away any more of the storyline but I am sure others will be as engrossed in the story as I was.

Karen's old fans will enjoy this new release by a writer who manages give us one good story after another. Just like she finally gave us a sequel to her first novel, Satin Doll in her book, Satin Nights; I am hoping she will do the same with Passin’. I would love to find out how Nikki returns to the Shanika of her youth and if she is able to reconnect with her family in Detroit.

Go right out and buy this book as soon as it is released.