Book Review: The Race Myth: Why We Pretend Race Exists in America 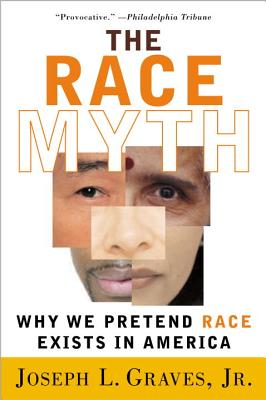 Read a Description of The Race Myth: Why We Pretend Race Exists in America

America’s racist thinkers have relied on three unchallenged assumptions; that races exist; that each race has its genetically-determined characteristics; and crucially, that social hierarchy results from these differences. We must recognize that the underlying biological diversity of the human species cannot be artificially apportioned into races, because races are simply not biologically justified.

I hope that this book will be the definitive statement of the difference between the biologically and socially defined concepts of race. If we can understand that all allegiance to racism is ideological, not scientific, then we may be able to silence the bigots once and for all.”
—Excerpted from the Introduction

Do you still think of people of different skin colors as being from different races? You probably won’t any longer after reading The Race Myth: Why We Pretend Race Exists in America. Written by evolutionary biologist Joseph L. Graves, Jr., this persuasive polemic succinctly states that there’s no scientific explanation for these so-called “racial” classifications, and that these distinctions have their basis not in biology but in bigotry.

If “race” per se doesn’t exist, then how do you explain the groupings of people one can readily observe? “What we think of as race today is really a surrogate for membership in cultural groups,” Graves argues, adding that “cultures actually evolve much faster than genes do.” Seen in this light, one can readily recognize race as an arbitrary caste system constructed to benefit the privileged at the expense of those designated as lower class. Such a pseudo-scientific rationale, he continues, enabled whites to establish a social hierarchy where they controlled access not only to material wealth but to physical, sexual and emotional well-being as well.

Because racist attitudes are seemingly second nature, Graves indicates that removing deep-seated prejudices calls for an overhaul of the prevailing mindset. And he is not all that optimistic, for, as he puts it, “The relations between America’s socially constructed races are getting worse, not better.” As roof, he points to black and white reaction to the O.J. verdict, to the disenfranchisement of African-American voters after the 2000 Presidential Election, and to the increasing gap between black and white SAT scores.

Nonetheless, the author suggests that because “every human being needs to feel respected” hope for eradicating this enduring divide rests with everyone working together to dismantle the myths which have promulgated white domination in favor of a color-blind altruism where one is judged by the content of his or her character. For as Graves concludes, “If we can live up to our creed of equality for all, then maybe we will finally have a chance to actualize the true spirit of democracy and the American Dream.”

Author Biography:
Joseph L. Graves Jr. is one of the world’s leading evolutionary biologists. He is currently University Core Director and Professor of Biological Sciences at Fairleigh Dickinson University. He has appeared in six documentaries about race and his opinions have appeared in The New York Times and the Los Angeles Times. He is also the author of The Emperor’s New Clothes.

Read Plume’s description of The Race Myth: Why We Pretend Race Exists in America.