Book Review: The Billion Dollar BET: Robert Johnson and the Inside Story of Black Entertainment Television 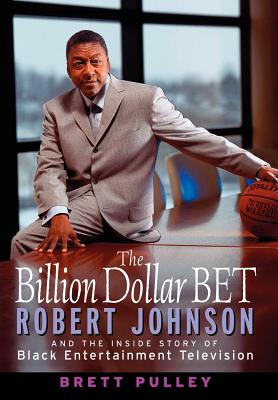 Read a Description of The Billion Dollar BET: Robert Johnson and the Inside Story of Black Entertainment Television

Brett Pulley goes all in with The Million Dollar BET, Robert Johnson and the Inside Story of Black Entertainment Television. He has woven a tale of about the fortuitous circumstances and incredible tenacity that have placed Johnson, the CEO of BET, as one of the most powerful men in media.

By now most of us have heard plenty about the billionaire from nowhere. The book begins by telling us that Johnson is originally from Freeport, IL via Hickory, MS which where he was born. Pulley initiates the intrigue by contrasting a small town boy that never quite felt comfortable following the leader, to a seasoned executioner who smiles as he tells you to relax.

Pulley reminds us that many different witnesses contribute to paint this portrait of the founder of BET. While the primary subject never relented his consent for the book, others whom could attest to Johnson's methods of mayhem gladly shed light upon the behind the door antics.

The Billion Dollar BET quickly establishes itself as a proud member of the ’tell all’ genre of literature. Pulley wastes no time delving into the extramarital affairs of Johnson. He never seems to miss an opportunity to dish dirt.

This perhaps is the biggest issue I had with the book. It is obvious that Robert Johnson's not so public life is juicier than Oaktown 357 (way back). But the enchantment of pillow talk only goes so far with me. I am much more interested in the story of the intestinal fortitude it took to pull off the power move (or moves) of the century. The author touches on the astute business savvy it took for Johnson to fandangle his way into a power structure that saw little or no value in Black cable viewers. My criticism of the book is slight and has very little bearing on my admiration of what the book sets out to accomplish.

Pulley's journalistic thoroughness is impeccable. He shies away from nothing while juxtaposing a backdrop of sex, scandal, and gossip on one of the most inspirational stories of our time. Robert set out to do what had not been done at the age of thirty-three. Now a few decades later he sits near the top of the heap in the media industry.

The Billion Dollar BET pays off in dividends that go beyond intrinsic values. Pulley portrayal of a man that has had incredible success but has also faced horrendous failures. A failed marriage of thirty-two years decimated family relationships, friends that have become intimate enemies, and public criticisms of his lack of concern of Black enlightenment. Johnson's sacrifices to bring BET to its fruition have been large, but for those who were near to him, their cost may have been much higher.

Bob Johnson - The Who's Your Caddy Interview with Kam Williams
http://aalbc.com/reviews/bob_johnson.htm

The Billion Dollar Bet: Robert Johnson and the inside Story of Black Entertainment Television by Brett Pulley  - Reviewed by Rondall Brasher
http://aalbc.com/reviews/billiondollarbet.htm

Read Wiley’s description of The Billion Dollar BET: Robert Johnson and the Inside Story of Black Entertainment Television.