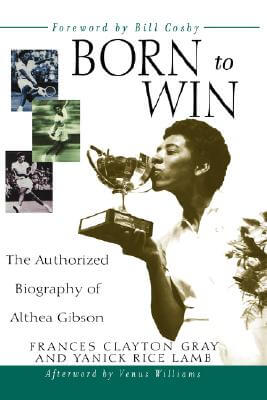 Read a Description of Born to Win: The Authorized Biography of Althea Gibson

"No Negro player, man or woman, had ever set foot on one of these courts. In many ways, it was an even tougher personal Jim Crow-busting assignment than was Jackie Robinson's when he first stepped out of the Brooklyn Dodgers' dugout.

The overflow crowd was four deep outside the court. Among the spectators were hecklers shouting, 'Beat the nigger!' While such taunts would unnerve many players, Althea blocked them out and maintained her focus.

Many people might forget that the Venus and Serena Williams weren't the first African-Americans to play professional tennis. Nor was the late Arthur Ashe either, although he was certainly a trailblazer in his own right. However, it was Althea Gibson (1927-2003) who integrated the sport, breaking down barrier after barrier in the late Forties and early Fifties.

Born and raised in Harlem, Althea was a fierce competitor blessed with the determination to develop her talents despite the innumerable obstacles designed to discourage blacks from even thinking about a career in tennis. Always carrying herself with a quiet dignity, she gradually rose in the ranks, perhaps peaking around 1957 and 1958, when she won back-to-back women's singles championships both at Forest Hills and Wimbledon. That feat would not be repeated for over 40 years.

Born to Win: The Authorized Biography of Althea Gibson revisits each of this remarkable role model's achievements, while touching on some of the low points of her life as well. This compelling portrait was the result of a collaboration between Frances Clayton Gray, Gibson's confidante and caretaker, and award-winning journalist Yannick Rice Lamb, who has served as an editor at Essence Magazine and at The New York Times.

Other contributors include Bill Cosby, who, in the Foreword, comically recalls playing against Althea in a Pro-Celebrity charity tournament, and Venus Williams, who, in the Afterword, credits her predecessor with paving the way for other African-Americans. "I am grateful to Althea Gibson for having the strength and courage to break through racial barriers in tennis," Venus concedes. "She knocked down walls, which gave us more freedom to concentrate on the game. And like Althea, I, too, feel a need to be a role model. Althea's accomplishments set the stage for my success. Through beneficiaries like me, Serena, and many others to come, her legacy will live on."

Born to Win, a fitting, loving tribute to an All-American icon, chronicling an admirable tale of black female empowerment during a difficult era for anyone who was either black or female, let alone both.

Read Wiley’s description of Born to Win: The Authorized Biography of Althea Gibson.