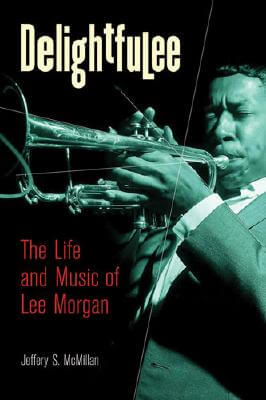 Read a Description of Delightfulee: The Life And Music Of Lee Morgan (Jazz Perspectives)

One of Jazz's trumpet kings, Dizzy Gillespie, a founder of bop, considered Lee Morgan one of the major post-bop trumpet stylists, along with Freddie Hubbard. Last year, Morgan was the subject of two biographies, one a superior book chronicling his stellar career by McMillian, a scholar of the American art form from Rutgers-Newark University, and the other lesser tome by Tom Perchard, a British college professor. The inferior book by Perchard was a flawed look at Morgan's life and music, with an overemphasis on the cultural and political environment during the trumpeter's life.

With the lousy Perchard biography aside, this engrossing McMillian book does justice to Morgan, the bright young horn player from Philadelphia, Pennsylvania, who did his musical apprenticeship in his hometown and created a smoldering, brassy trumpet style of his own. Jazz buffs note Morgan's emergence into the music royalty followed in the footsteps of such legends as John Coltrane, Clifford Brown, McCoy Tyner, Bobby Timmons, the Heath Brothers, Ray Bryant, Charlie Persip, and Dizzy Gillespie. The author explores Morgan through his early years as a failed vibe player to his switch to the trumpet where he excelled in his teens. By age 17, he was a lead horn soaring on the high notes in Dizzy's big band.

A gifted player with a sense of funk and dazzling technique, Morgan was hired to handle the trumpet duties in the hard-driving drummer Art Blakey's band, with capable stablemates Curtis Fuller, Hank Mobley and Ray Bryant. Also, he freelanced on other dates for the legendary Blue Note label, being a sideman with John Coltrane, McCoy Tyner, and Wayne Shorter. However, it was Morgan's own offerings that captured the public's attention, a series of popular albums such as Candy, The Sidewinder, The Gigolo, Search For The New Land, Cornbread, Live At The Lighthouse, and the innovative Lee Morgan.

McMillian uses countless interviews from Morgan's peers and business associates to convey the multi-faceted musician, whose persona matched his playing style: cocky, confident, playful, soulful, and lyrical. Toward the end of his life, the author shows the reader a Morgan wanting to change his life, trying to move on from the heroin addiction and his longtime bond to Helen More, a woman known to fly off the emotional handle. The horn man was busy at the start of 1972, two popular club dates and a TV appearance, but a tragic fate awaited him on a cold February night at a Slugs club in New York City.  Helen More, angry about his romance with another woman, shot Morgan in the chest and he was pronounced dead at age 33.

Showcasing Morgan as a man, musician and performer, McMillian's book, Delightfulfee, digs deep into the mind, life, and loves of the critically acclaimed trumpeter who was cut down too early. Informative, penetrating, and candid, this biography belongs in any library of African American musical history or cultural achievement.