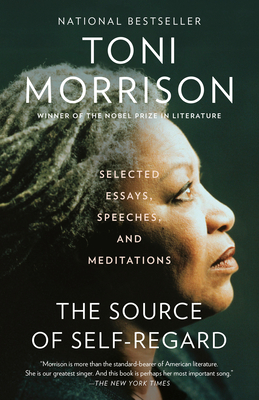 ADD to CART
(in stock Jun 18)
Buy the Audiobook

Read a Description of The Source of Self-Regard: Selected Essays, Speeches, and Meditations

The title of Toni Morrison’s new book, The Source of Self-Regard, propels one to ponder, and the extended thought is due to the dual functions of the words “source” and “regard,” both can serve as either noun or verb, and the two usages yield different interpretations of the title. This plurality of usage goes far beyond words in Morrison’s new book.

It can be argued that Morrison’s current work is not only a source of information and commentary for the individual reader, but also for nations and organizations. Throughout the text, Morrison indicates that an individual should regard the effects of what their actions produced, and she argues that this is also the responsibility of nations. Like the individual, a nation must regard the effects of its policies and actions, and just as an individual is responsible for how their actions affect others, so are nations and corporations.

Morrison’s discussion spans decades; however, the reason for the discussions remain consistent to elucidate repression, control, the origins of racism, the effects of globalism, private and public space, the future, masculinity, language usage, population, the goals of war, race and raced, being foreign, and motherhood; and these mentioned issues are not comprehensive of all discussions in the text, each reader will interpret their own topics and issues from the writing.

Toni Morrison’s The Source of Self-Regard will keep readers pondering and returning to her essays, speeches, and meditations again and again. The writings contain Morrison’s opinions and observations on topics that have marginalized art and people. Hopefully, the book will cause the individual and the individuals that make up global forces to ponder.

Read Knopf’s description of The Source of Self-Regard: Selected Essays, Speeches, and Meditations.