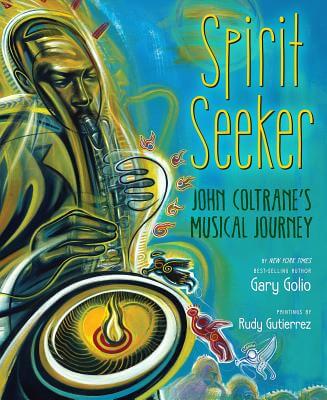 “Music and religion were the twin forces that shaped John Coltrane’s early years. Both of his grandfathers were Methodist ministers, and each of his parents was a skilled musician.

In North Carolina during the 1930s, the church was the center of black community life. At a time when discrimination was widespread, the church offered comfort, hope, and guidance. One way it did this was through music…

Perhaps more than any other jazz musician, John Coltrane let his religious feelings guide and inspire his work. Of his recovery from drug use, he wrote, ‘During the year 1957, I experienced, by the grace of God, a spiritual awakening which was to lead me to a richer, fuller, more productive life. At that time, in gratitude, I humbly asked to be given the means and privilege to make others happy through music.’

It was his commitment to sobriety for the last ten years of his life that allowed him to pursue his vision and to create some of the most enduring music in the field of jazz.”
—Excerpted from the Afterword (pg. 39)

John Coltrane (1926-1967) pioneered a new sound on the saxophone prior to passing away at an early age, but not before leaving behind a much beloved collection of innovative recordings. Sadly, his untimely demise from liver cancer was likely the result of the heroin habit he had kicked a decade before.

But is the life of a legendary jazz great with such a checkered past the appropriate subject of an illustrated children’s book? Yes, argues Gary Golio, author of Spirit Seeker: John Coltrane’s Musical Journey.

After all, over a million of African-American men are currently behind bars for non-violent narcotics offenses, and millions more are ostensibly dealing with drug addiction. For that reason, a biography detailing Coltrane’s failings and ultimate triumph over substance abuse might serve as a warning to kids apt to face similar temptations.

Golio relates how ‘Trane’s troubles started with alcohol while still in his teens in the wake of the deaths in rapid succession of his father and several other close family members. Regrettably, when the young man subsequently encountered adversity in the form of racism, relationship problems and money woes as an aspiring musician moving around the country, he gradually graduated from that gateway drug to illegal stuff.

In the end, we learn that he cleaned himself up with the help of a return to his religious roots, a spiritual path that undoubtedly provided considerable comfort when he was forced by an incurable affliction to prepare to meet his Maker. A warts-and-all, cautionary tale chronicling both Coltrane’s personal flaws and incomparable genius.