Book Review: Panorama: The Missing Chapter: From the Memoir Views from the Cockpit 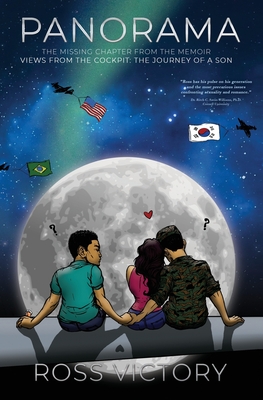 Read a Description of Panorama: The Missing Chapter: From the Memoir Views from the Cockpit

With Panorama – The Missing Chapter From The Memoir Views From The Cockpit: The Journey Of A Son, author and “travel enthusiast” Ross Victory offers readers a sample from his memoir. The book opens with Ross getting emergency medical treatment in a South Korea hospital after a severe panic attack. Ross is in Seoul, working as a tutor. Anxiety is the cause of his physical unraveling following skipping heartbeats and sleepless nights.

“My Seoul adventure had become a soul nightmare,” Ross reflects. “My brother and his mysterious stage IV brain cancer had my family on a terror loop, as my recently divorced dad frolicked around China chasing vaginas… ” He concludes: “It was time to take my ass home.”

In a chance meeting, Ross encounters Alvi, a U.S. soldier at a bar named Panorama, where Koreans sing karaoke and drink Soju (cheap vodka). Alvi, one of a group of American soldiers, is appealing to him in his bisexual way. The men invite Ross to party with them in Hongdae, the fun district. Following a night of partying, he stands in front of his students in class, exhausted.

Along the way, Ross gives us a basic understanding of South Korean culture and cuisine, including the infamous dog cafes where diners are served chunks of canine meat. He also exposes places where customers eat rabbit or cat meat. There is an interesting episode where Ross tries to eat live octopus and is surprised when its nerve signals surge through the tentacles and it squirms in his grasp.

In a world where sexual categories mean nothing, Ross finds temporary solace, with Sasha, a bisexual Korean girl whose Black and Korean families are at odds. She is sassy, street-savvy, and tolerant of Ross’ dual sexuality. Ross feels uneasy about his sexual orientation because as a teen, he discovered a 40-page report in his dad’s writing, which stated that same-sex relationships are sinful.

One night as both Sasha and Alvi vie for Ross’ attention in a club, Alvi is randomly attacked. Besides being physically battered in the club, Alvi suffers from crippling symptoms of Ménière’s disease, an inner ear disorder causing vertigo and dizziness. For Ross this is the last straw and he distances himself from Alvi and Sasha. The club incident serves as a spark for Ross’ exit from Seoul to return to LA and his mother’s home. Eventually, he receives an e-mail from Nerissa, who met Alvi after Ross’ departure, saying they are expecting a son. She worries that she’ll have to parent their child alone and hopes Ross can persuade Alvi to be more present. Ross wonders if he should forget them, dismissing them as nuts. Alvi, who is part Brazilian, hates that Nerissa contacted Ross and concludes all Americans are fake and liars.

With unadorned, bold language, and unafraid to show the emotional damage to his heart and life, Ross moves from one shattering episode to the next, not considering if each pivotal moment shows him in an unflattering light. “As it applies to this story, I believe that sometimes one person holds two keys – one key to unlock our physical selves and the other key to unlock our nonphysical selves. Hold this person tight. Sometimes separate people hold separate keys. Hold them tight. When it’s over, all that will matter is our story, our suffering we’ve endured and what we did next.”

Those are urgent, courageous words from a Black man confronting the challenges of his sexual orientation, guilt, cultural prejudice, and gender bias. It takes a lot to stand up and honestly speak your truth.

Read J. Ross Victory’s description of Panorama: The Missing Chapter: From the Memoir Views from the Cockpit.