Book Review: The Love Ethic: The Reason Why You Can’t Find and Keep Beautiful Black Love 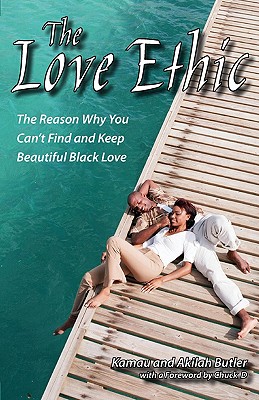 by Akilah Butler and Kamau Butler

Read a Description of The Love Ethic: The Reason Why You Can’t Find and Keep Beautiful Black Love

Inspired by their work with African American couples at their Chicago organization, the acclaimed Twinlineal Institute, Kamau and Akilah Butler, both highly accredited professionals with many advanced college degrees, have written a book, The Love Ethic: The Reason Why You can't find and Keep Beautiful Black Love, with a very timely message directed to the Black community. The Butlers note as their mission of supporting couples ’trying to love and respect one another in a world that makes it quite difficult to do so.’

One of the central themes of the book is the mutual distrust between African American men and women and how the mainstream society nurtures that bitter schism. As the authors say, the Black women complain that their men are ’playas, womanizers, and ballers,’ with the remaining of the lot being gay or on the ’down-low,’ or hooked up with white women. That is countered by the men saying their women are golddiggers, castrating, or naggers.

This book, according to the Butlers, represents the idea that a beautiful love is waiting for anyone willing to put in the work and sacrifice for it. Both men and women should have moral and spiritual standards, because couples and families create our future mothers and fathers of our children, our collective potential. Repeatedly, the authors stress that this is not the time to let the strength of the Black family deteriorate, falling victim to misogyny, mistrust, lies, betrayals, playa behavior, anger, inferiority, and ignorance. All of those critical liabilities will make our people extinct or at least, socially and culturally meaningless.

Their notion of a ’twinlineal’ philosophy is an interesting one. It means achieving a balanced perspective in the relationship, a union of balanced male and female equality. The Butlers emphasize a twinlineal relationship prevents strife and stress in the daily business of being together, allowing the couple to venture into ’fertile, untapped areas in their lives.’ That is why the authors are such cheerleaders for marriage and family. Not only marriage legitimizes love and builds families, they note it gives the couple direction, definition, and the ultimate cultural and social expression of emotional union.

Why are Black marriages and families in peril? The Butlers point the fundamental blame at the long, painful institution of American slavery, which disrupted the groundwork of the family as we know it today. We still have not recovered from its hurts and scars. As they suggest, we are still blaming ourselves for its pain and suffering, while not being mindful of the role of history on us. We have survived despite the backdrop of discrimination and the historical residue of slavery. The authors repeat that we need to look back in order to move forward. They feel that many relationship problems have been caused by a forgotten love ethic due to the severe wounds inflicted by oppression.

As the Butlers teach the singles and couples at their institution, love must be taught and learned. They add that Blacks get strength and power from being with each other, not from being apart. The statistics they cite are very grim. One recent poll says that a Black child during the days of slavery was more likely to grow up living with both parents than he or she is today. Another survey cites that the Black community was comprised of 90% families with both parents in 1920, but that figure slipped to 50% in 1990 and 30% in 2007. With out-of-wedlock births taken out of the equation, the birthrates of Black married women have fallen off sharply, jeopardizing the cultural and social impact of our community.

In the book, the Butlers present the catalog of ailments and defects within the Black community, but they also create a positive vision for the enduring survival of our people. They set out a list of principles of ’the Love Ethic:’ including justice, balance, reciprocity, harmony, unity, propriety, responsibility, faith, proper communication, common purpose, and order. The terms are self-explanatory and make good sense.

As they write in several places throughout the book, our survival depends on a spiritual and emotional transformation: ’We must have the courage to see each other with new loving warmth and act accordingly. Love is not a fairy tale.’

This is an impressive and important book about the survival of our families and community. While other writers blame and shame us, the Butlers have served up a practical, no-nonsense positive remedy of hope and inspiration for what ails us. This book truly packs a punch.

Read To Be Determined’s description of The Love Ethic: The Reason Why You Can’t Find and Keep Beautiful Black Love.