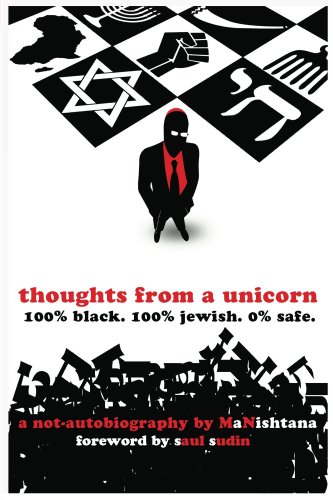 “Born to an African-American Orthodox Jewish family, MaNisshtana has spent his life being Black, being Jewish, fielding questions and accusations from all sides, and occasionally just Being. Through this witty, straight-talking collection of memoirs, essays, and a few haikus, this ‘not autobiography’ lends insight on his love of peanut butter & jelly, reflections on loss, fond memories, honest regrets, and experience-induced commentary on the social, racial, and religious politics and intersections of the American-Jewish community and today’s African-American attitudes.”
—Excerpted from the Book jacket

Earlier this year, Simon Scharma published The Story of the Jews, a fairly comprehensive examination of Jewish history covering the past twenty-five hundred years. That encyclopedic opus was also turned into a very compelling PBS documentary which was narrated by the author, a tenured professor at Columbia University.

The only criticism I have of the series is that it didn’t devote an episode to the African-American Jews of New York. To get a sense of what life is like for a brother from Brooklyn who is both black and Jewish, check out Thoughts of a Unicorn, a meandering memoir written by a mysterious figure who refers to himself as MaNishtana.

I suspect that the name might be an alias because Ma Nishtana (with a space) is also the term for “The Four Questions” traditionally posed on Passover at the start of the Seder ritual. Regardless, the author is otherwise very forthcoming about the fact that he was born in 1982 into an Orthodox family that can trace its Jewish roots in the United States back seven generations.

This “not-autobiography” proves to be an impossible-to-pigeonhole mix of poetry, personal anecdotes, acerbic witticisms, wistful reflections, favorite quotes and too hip for the room sarcasm reading like the stream of consciousness of a Hebrew Hunter S. Thompson. Featuring colorful chapter headings ranging from “Uncle Tom’s Shteibel” to “Ham: The Other Black Meat” to “I Won’t Should on You If You Don’t Should on Me,” this gonzo equal opportunity offender takes no prisoners in the process of sharing a unique, sophisticated and sincere perspective of the world worthy of contemplation.