Book Review: Thelonious Monk: The Life And Times Of An American Original 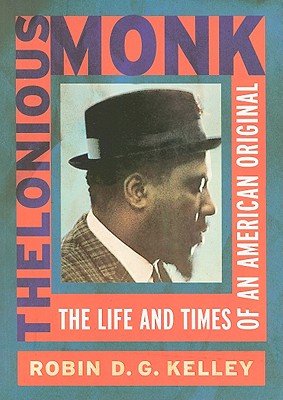 Read a Description of Thelonious Monk: The Life And Times Of An American Original

Highly detailed, stunning, and comprehensive, Robin Kelley's excellent biography of innovative jazz pianist Thelonious Sphere Monk dismisses the previously publicized myth of the allegedly eccentric, bizarre oddball, who was named "the High Priest of Bebop." Many of the popular articles and documentaries about Monk perpetuated various  rumors and falsehoods surrounding the man, musician, father, and husband, including the much acclaimed Clint Eastwood-produced film which showed the slow slide of the genius into emotional and physical disarray. With Kelley's incisive analysis of Monk, new light is shed on the man, without the negative psychological labeling or the tabloid "warts-and-all" viewpoint.

Kelley, a professor of history and American studies at the University of Southern California, was determined to wipe away the reputation of the pianist as being reclusive, childlike, primitive, and erratic. He goes back into Monk's family tree to the man's 18th century relatives in North Carolina, follows his kinfolks north to New York City's fabled San Juan Hill neighborhood, his childhood, and his early musical apprenticeship, which included intensive classical training on the keyboard. The author interviewed several of Monk's relatives, getting a well-rounded portrait of the young man as a working musician who wanted to make a name for himself and his notable compositions. He also had access to confidential family papers and recordings, culminating fourteen years of research on this book.

Not neglecting the legend's creative upbringing, Kelley includes the teen Monk accompanying a gospel band on tour, the hit-and-miss musical apprenticeship with icons such as Dizzy Gillespie, Charlie Parker, and Coleman Hawkins, the sizzling jam sessions at Minton's, the mentoring of the legendary Bud Powell, and the iconic record dates with Riverside and Columbia Records. That's all here. But Kelley does not leave out the tardiness, the odd stage antics, the dancing in circles on gigs, or the wild hats or the sometimes sullen demeanor of the man. He attributes these emotional and behavioral glitches to an undiagnosed bipolar ailment.

As Kelley wrote in the book's prelude of the musician, who penned such jazz evergreens as Round Midnight, Straight, No Chaser, and Ruby My Dear: "Thelonious Monk was very much of the world, at least until mental and physical illness finally caused him to withdraw, making his world seem much smaller, self-contained, and, at times impenetrable. For most of his life, he remained engaged and fascinated with his surroundings."

A marvelous example of jazz scholarship, Thelonious Monk: The Life and Times of an American Original answers many of the complex and challenging questions of a man who knew the steadfast love and respect of his family and many of his peers, and left one of the richest musical legacy of our nation in the twentieth century.

Read Free Press’s description of Thelonious Monk: The Life And Times Of An American Original.