Book Review: Freedom’s Daughters: The Unsung Heroines of the Civil Rights Movement from 1830 to 1970 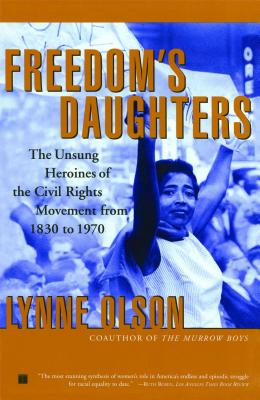 Read a Description of Freedom’s Daughters: The Unsung Heroines of the Civil Rights Movement from 1830 to 1970

“Women hold up half the sky” is one of Chinese revolutionary Mao Tse Dung’s most often quoted statements. However readers of Freedom’s Daughters: The Unsung Heroines of the Civil Rights Movement will conclude that the women it profiles held up far more than just half. Freedom’s Daughters examines with satisfying depth the complete spectrum of women’s contributions to the civil rights movement — from slavery to the turbulent 1960’s. The majesty of the 60 plus women profiled, and the magnitude of their efforts combined with the excellence of author Lynne Olson’s writing and research will leave readers enthralled.

Women civil right workers formed the unseen foundation which men planted their flags and staked their claims. Fifty years after the movement’s heyday readers may ask "Why quibble now about giving credit and why split hairs over where it is due? Can’t we just know that the movement lifted the world for the better? Why is it important to know who did what?

At this time when Eurocentric and male-centric "his" tories are being increasingly derided as incomplete, this question of proper attribution is critical to all segments of readers. Men need to be aware of the contributions of foremothers and sheroes. Women need to have their self-images reinvigorated with these blasts from the past. Blacks must be reminded of the consistent core of white souls who denounced racism by laying their lives on the line. Youth simply need to know this story. Thus, Freedom’s Daughters is a crucial book that’s fills an acute void. Fortunately its execution is as magnificent as its reason for being.

Freedom’s Daughters busts open the scope of the American Civil Rights drama to extol the black and white women who received little or no recognition. Of course Rosa Parks and Fannie Lou Hamer are included, but readers also are introduced to the truly impressive stories of Pauli Murray, a legal scholar from Washington D. C. who staged one of the first lunch counter sit ins in the 1940’s. We also learn of Barbara Johns, a Virginia school girl who stood up against white adult bigotry and black adult complacency to end the separate and unequal conditions at her school. Readers will be greatly inspired by the courage of women, teens and girls, black and white, who risked their lives and endured unimaginable abuse. It is heartening to recall the commitment of white women to the struggle, such as Angelina and Sarah Grimke who faced ostracism to protest slavery; and Virginia Durr who consistently searched her soul to examine her own personal racism; and Viola Liuzzo, a homemaker from Detroit, who sacrificed her life for the cause.

Author Lynne Olsen not only enlarges the scope of the civil rights story, but puts events into correct context by correcting myths and misperceptions. Contrary to the frequently told version, Rosa Parks ignited the movement not because her feet were tired, but because she had been trained for a decade as an activist and she recognized that the right moment had come for her to take a stand. Correctly viewing Parks’ actions enables readers to distinguish between an act of conscious self-determination versus an act driven by fatigue that lucked into the start of something big. Even the prickly Stokely Carmichael benefits from Olsen’s evenhanded examination of the ribald statement attributed to him, that the only position for women in the movement was prone (i.e., laying horizontally to sexually service the men of the movement). Not only was this remark misquoted, it has been taken completely out of context. Carmichael, a renowned cut-up, was doing a stand up comedy routine for the amusement of a group of his fellow black, white, male and female SNCC workers.

Freedom’s Daughters does make abundantly clear that a woman’s appearance and image determined her suitability to participate in the movement. Male powers-that-be supported Rosa Parks as a symbol for the Montgomery Bus Boycott because her petite stature and bun hairstyle projected the right image of propriety. "Central casting couldn’t have done better: a perfect lady, who had to work for a living and ride the bus every day, but who had the proper manners and speech of the middle class white women." But it was the 18 months of pounding the Montgomery pavements by poor, working, black women — maids, cooks, and cleaning ladies — that made the boycott successful.

Even a brilliant strategist and tactician like SNCC Coordinator Diane Nash was subject to having her worth evaluated through the appearance prism. While her ascendance as a leader was inevitable due to her masterful intelligence and cool intellect, her empowerment was facilitated and underscored by her remarkable beauty. "[All of the men in the movement] wanted to marry Diane", congressman and activist John Lewis noted.

Freedom’s Daughters draws strong connections between the plights of blacks and women, both being in the same powerless boat. There is a good exploration of the complex and conflicted relations between white mistresses and their black female slaves. This conflict was never eradicated but reared its ugly head during the 1964 Mississippi "Freedom Summer" when the inequality of sexual attention given to the female SNCC workers created a permanent schism. "The clash between black and white women in Mississippi seemed to stem in some cases from the fact that each appeared to have what the other wanted. Unlike many white women, black women were not restricted to office work or the Freedom Schools. They were out on the front lines with men, canvassing, organizing, going to the courthouse and in general asserting themselves in no uncertain terms’[but]’when the day was over and there was time to relax, the men took out [their white female co workers]. "Our skills and abilities were recognized and respected," Cynthia Washington noted, "but that seemed to place us in some category other than female".

An important revelation in Freedom’s Daughters is the way male and female leaders perceived and wielded power. The legendary and greatly respected Ella Baker of the SCLC, NAACP and SNCC had a completely different view of people management than did Martin Luther King. "King ran the SCLC in the same authoritarian manner that he and most of the other ministers ran their churches. To them power meant control over others. Baker had a completely different view of power. She believed that King’s job and the SCLC’s should be to nurture people, to help them find the power within themselves to change their own lives and the society in which they lived."

Freedom’s Daughters also makes clear that women stood up to denounce racism in many situations where men remained silent. Rosa Parks was inclined toward activism because her fiery husband was embattled, tired and burned out. Eleanor Roosevelt relished her growth as a rights activist and would protest racism when the political and patrician Franklin Roosevelt would not deign to speak up. At a meeting of the Montgomery Improvement Association the ministers present were asked to join a Federal level desegregation suit. "Which of the twenty-five clergymen present would volunteer? They had dragged their feet on filing the federal suit in the first place, and now they looked at the floor and each other. Ten minutes went by. No one accepted the challenge."

The women in Freedom’s Daughters were people of substance who nurtured concerns that were light years beyond the trivial obsessions of contemporary women. With their superhuman courage and conviction these saints-among-us seem otherworldly, and are almost unrecognizable in this new millennium. Think of Ida B. Wells with her fierce determination to extinguish lynching and to gain the right to sit in a train car. Underground Railroad conductor Harriet Tubman maintained a laser beam focus. She carried a gun for self-protection, but she also used it to "nudge" runaway slaves with second thoughts, saying "You’ll be free or die". Nothing wishy washy about Sister Tubman! It is hard to imagine a young women of today keeping her eye on the prize the way Harriet did for she would probably be too fretful about maintaining her weave and nails to give much thought to social justice. Freedom’s Daughters raises a mirror and shows us the vast amount of moral high ground that has been lost over the years.

But Freedom’s Daughters did not sacrifice for nothing and our martyrs did not die in vain. The civil rights movement yielded choice fruit, feeding directly into the women’s movement, black power movement and the anti war movement. One rights activist observed: "As a result of the civil rights battles fought by these women, everybody who opposes polluted water, nuclear power plants, a highway coming through your land, farm closings, plant closings, unemployment, housing — everyone of those people is continuing the struggle"

Note to Freedom’s Daughters of today: Start flexing your biceps and triceps now. A whole lotta sky remains to be upheld.

Read Scribner’s description of Freedom’s Daughters: The Unsung Heroines of the Civil Rights Movement from 1830 to 1970.