Book Review: Rising Up From the Blood: A Legacy Reclaimed- A Bridge Forward: The Autobiography of Sarah Washington O’Neal Rush, The Great-Granddaughter of Booker T. Washington 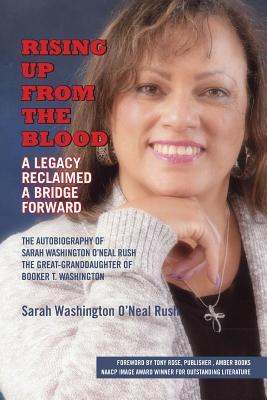 Read a Description of Rising Up From the Blood: A Legacy Reclaimed- A Bridge Forward: The Autobiography of Sarah Washington O’Neal Rush, The Great-Granddaughter of Booker T. Washington

“I am proud and honored to be the great-granddaughter of Booker T. Washington. The day I went to my first Washington family reunion, I had no idea how dramatically my reality was about to change…

When I first stepped foot on the campus of the renowned Tuskegee University, something magical happened… I had an epiphany and was immediately inspired to improve my life.

Prior to the reunion, I was going in the wrong direction… I didn’t realize from whence I came… By the time I was 16, I had become a lost soul, confused about life.

It wasn’t until I arrived in Tuskegee for the first time in my life that I would bear witness to my foundationŚa foundation that was there all along. That’s when I began to live on purpose. It is also why I now feel a burning obligation to share my story…

It is my hope that this book will empower others to change unhealthy mindsets, increase levels of self-worth, and instill a healthy sense of self-love and self-respect within.”
—Excerpted from the Preface (pages 1-3)

Despite being a direct descendant of Booker T. Washington, Sarah Washington O’Neal wasn’t born with a silver spoon in her mouth. Quite the contrary, she and her big brother James were raised on a rough side of Oakland, California by a single-mother who never mentioned their famous forbear. Perhaps she was ashamed by her relatively-lowly station and having to hold two jobs just to keep a roof over their heads after being abandoned by her husband.

The absence of a father figure would have a profound effect on Sarah, who ended up involved with a series of inappropriate partners. This was reflected in her picking bad boys who abused, cheated on, exploited, beat and/or raped her. That futile search for male validation started when she was molested at the age of 9, an event triggering a rapid descent leading to an unplanned pregnancy by the time she was 15.

Sarah’s baby-daddy neither stuck around to raise Mario, Jr., nor paid much in terms of child support, which meant the financial burden of the baby first fell squarely on the shoulders of her already cash-strapped mom. And when that responsibility proved too much for the beleaguered grandmother, the troubled teen was forced to fend for herself and the infant on her own.

Consequently, she soon became dependent on government subsidies like welfare, food stamps, public housing and Social Security benefits (after her father turned 65). Meanwhile, between her substance abuse problems (alcohol, weed, coke) and poor choice of men, it was little wonder that she had another child out-of-wedlock just a half-dozen years later.

Sarah got her act together after attending a Booker T. Washington family reunion, but not before having been tested in more ways than the Biblical character Job. Thanks to a combination of Christianity and psychotherapy, she finally found a righteous path once and for all.

A faith-based resolve has served Sarah well ever since, and she and husband Anthony Rush are happily married and raising a beautiful blended family. Her triumph over the odds is recounted in revealing fashion in Rising Up from the Blood, a mesmerizing memoir that reads like the literary equivalent of a TV soap opera.

Besides Sarah’s personal story, this riveting autobiography includes a family photo album containing snapshots of Booker T. and the rest of her relatives, as well as snippets of sound advice for other lost souls looking to turn their lives around. An empowering opus by a thriving survivor who has ultimately proven herself deserving of her very impressive family pedigree.

Read To Be Determined’s description of Rising Up From the Blood: A Legacy Reclaimed- A Bridge Forward: The Autobiography of Sarah Washington O’Neal Rush, The Great-Granddaughter of Booker T. Washington.