Book Review: Praedamus Let Us Prey Selling Heaven: It's All An Illusion 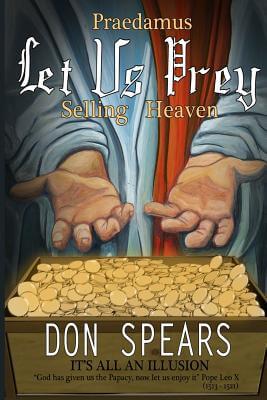 Read a Description of Praedamus Let Us Prey Selling Heaven: It's All An Illusion

“Religion plays an important part in most people’s lives… Many of us have absolute and often blind faith in the churches we attend. But is such dedication and unconditional loyalty well-founded, or even smart? Is it good for people to live their fragile lives based on stories told to them by someone who is not an informed, trusted family member, or a loyal and devoted friend?

Why have Christian churches kept their members in the dark for over 2,000 years? What did the church hierarchy actually know that wasn’t being shared? And why does the church continue to keep secrets, and will that always be the case?

Let Us Prey takes a brief look at organized religion and its attendant, ominous consequences. It is an attempt to help you understand and appreciate how and why your secular world and spiritual world work, or do not work.” —Excerpted from the Preface (pages 11-12)

Televangelist Creflo Dollar recently asked members of his congregation to tithe the $60 million he needs to buy himself a luxurious Gulfstream jet so he could travel in style while spreading the word of the Lord around the world. Is the popular prosperity preacher sincere or just another hustler in a collar?

Before you answer, you might want to read Praedamus: Let Us Prey, a jaw dropping expose’ written by Don Spears, a brother who is not one to mince words while making a full frontal assault on organized religion. This very timely tome represents the culmination of 9 years of research in religious history stretching back centuries from the present.

The erudite author tackles an impressive range of topics, including racism, homosexuality, Jesus, slavery, Shakespeare, lynching, Sir Francis Bacon and the ethnic cleansing of Native Americans by European colonists, to name a few. Despite the diverse subject-matter, the book adds up to make a cohesive point, since every discussion relates directly to religion.

For example, he talks about how the evil institution of slavery was made respectable by Christianity. This enabled slave masters to pass themselves off as moral pillars of the community while committing serial rapes on black females whose private parts they literally owned. Spears goes so far as to speculate that the reason the Confederates were willing to secede from the Union and die in the hundreds of thousands rather than abolish slavery was because of the sex on demand they had become so addicted to.

Elsewhere in the text, the author questions the wisdom of adopting the faith of one’s enslavers, before offering Black Liberation Theology as a viable alternative. That progressive philosophy indicts “un-Christian” white racists for pushing a different brand of their religion on blacks than the one they practiced. Consequently, to this day, most African-Americans “stake their whole existence on heaven,” as opposed to the way whites focus on faring well, materially, in this life.

Other chapters explore whether Jesus was gay, if Shakespeare ghostwrote the King James Version of the Bible, and how lynching functioned “as a way of reminding blacks of their inferiority and powerlessness.” Spears’ ultimate aim, here, is ostensibly to undo the ongoing brainwashing of the black masses by the time they finish reading his incendiary arguments.

A whole new look at the Good Book arguably bordering on blasphemy.

Read Spears Publishing’s description of Praedamus Let Us Prey Selling Heaven: It's All An Illusion.