Book Review: A Hand to Guide Me 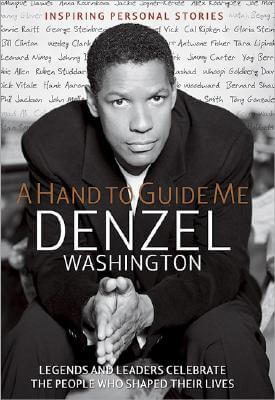 Read a Description of A Hand to Guide Me

"Every individual you are about to meet in these pages has remained humble, and that's been my mantra for as long as I can remember’ and it's something I've tried to model for my children as well. But if there's one lesson to be learned from the voices you're about to hear, it is that it's not only on us. It's on the folks around us as well.

And mostly, it's on our ability to keep open to their example. That's the underlying message in these pages, that you can draw a line from every great success back to some rock-solid foundation. A parent. A teacher. A coach. A role model. It all starts somewhere.

And for me, that somewhere is with God.’
’Denzel Washington in the Introduction

Denzel Washington tapped a most impressive collection of contributors for this project, including Presidents Clinton and Carter, Baseball Hall of Famers Hank Aaron and Yogi Berra, NBA Coach Phil Jackson, Academy Award-winner Whoopi Goldberg, American Idol Ruben Studdard, Muhammad Ali, and emerging ing’nue Kerry Washington, to name a few. The idea behind the book was to have each person share a refection about a mentor who meant a lot to them.

While each of the stories is certainly sincere and touching in its own way, the problem, for me, is that there was a certain sameness to the narratives style from entry to entry. The source of the problem probably has to do with the fact that one person, Dan Paisner, was hired to conduct the interviews and to shape the tone of the text.

Dan is a very gifted ghostwriter who has co-written autobiographies with Governor George Pataki, Mayor Ed Koch, TV Judge Glenda Hatchett, actors Malcolm Jamal Warner and Anthony Quinn, World Trade Center Survivor Daniel Picciotto, TV Weatherman Willard Scott, talk show host Montel Williams, and FBI Hostage Negotiator Clint Van Zandt. But his hand starts to show here when asked to condense 74 different celebs. The upshot is that A Hand to Guide Me begins to feel like you've read it already after a few chapters, due to the diverse personalities having been flattened out in a similar fashion.

Thus, this inspirational tome is likely be best enjoyed if consumed at the rate of no more than one memoir a day over the course of several months.

That way, you might not notice how much the authors resemble each other.

Read To Be Determined’s description of A Hand to Guide Me.