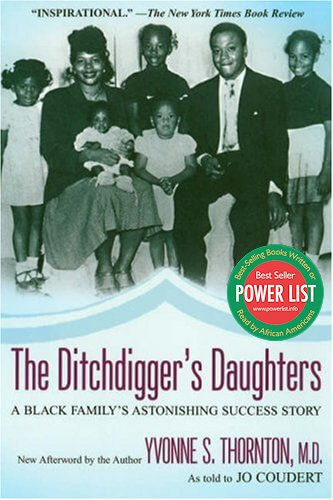 Read a Description of The Ditchdigger’s Daughters

The Ditchdigger’s Daughters is the story of Donald Thornton, a laborer, and his wife Tass, a domestic, who managed to shepherd their six daughters into careers of professional status.  Consider the results of their efforts: Two physicians, an attorney, a court stenographer, a dentist and a registered nurse.

Not too shabby for a self described ditchdigger whose words of inspiration to his daughters went like this: "You kids are black.  You are dark skinned and ugly--I love you better than I love life--But I'm not always gonna be around to look after you, and no man's gonna come along and offer to take care of you because ain't light skinned.  That's why you gotta be able to look after yourselves.  And for that you gotta be smart."

Ouch!  This frequently stated message represents both the admirable and the deplorable qualities that co existed within Donald.  Foresight, leadership and hard work resided next to gross insensitivity and a rigidity that would significantly dent his record of remarkable parenting accomplishments.  Donald was definitely a his way or highway kind of guy from the radical fundamentalist school of parenting.

Although music, self sacrifice and upward mobility all figure prominently in DDD, this memoir merits readers' attention for its effective recreation of the characters, its important messages, its genuineness, its overall excellence, and its inspiration.

DDD contains plot turns that everyone can identify with.  Parts of the story even read like a thriller.  When the two oldest daughters defect from the family because of Donald's stringency, they start a chain of reactions that threaten the viability of this heretofore loving and stable unit.  Donald becomes verbally and emotionally abusive to Tass.  As a result Tass experiences a depression that necessitates clinical treatment.  The remaining daughters were filled with fear and confusion at these events.  The Thornton family found themselves facing a crisis of epic proportions: would this black family survive?  The answer is not as neatly packaged as a sitcom, and reflects the messy fits and starts of real people living real lives.

One of the most interesting components of this tale is the sisters' formation of a successful touring band.  With Donald as their manager they played colleges and other venues as The Thornton Sisters in order to fund their own college educations'.  On weekends these six time winners of the Apollo Theatre's amateur night would share bills with the likes of the Temptations and Martha and the Vandellas - and often bested these more renowned performers by digging deeper to give their audiences something extra.

Yvonne was the first to fulfil her father's dream of becoming a physician.  Her recounting of her climb to become a respected and successful Obstetrician-Gynecologist is an endearing portrait of a physician as a young woman.  As a black female doctor she suffered many rude comments and one remark, made by a white male colleague who said, "I assume you know what you're doing", was particularly distressing.
"I arrived back home crying and raging’If I'd been a man, he wouldn't have talked to me like that.  If I'd been white, he wouldn't have questioned my ability to do what was right."

Once his daughters were successfully launched Donald became a foster parent to Alfred, a pre teen boy, and this experience exposed his sexism and two faced-ness.  Donald's rearing of Alfred and the way he had raised his daughters were as different as day and night.  Once he was able to parent a son all of his nose to the grindstone philosophy evaporated, and indulgence stepped in its place with disastrous results.
"Daddy bragged, "Finally I've got me a son."  So bewitched was Daddy by the satisfaction of this that before very long Alfred discovered he could get around quite easily. With a bit of care and subtlety and a show of loving attention, he chivvied Daddy into buying him silk underwear, handsomely tailored suits, and the most expensive shoes from the best stores.  For fear of alienating Alfred he eased off giving him unwelcome news about the necessity of getting an education, about dignity and responsibility, about sizing people up, and keeping your word."

So there you have the blessings and tribulations of being the Ditchdigger's Daughters.  Many readers will conclude that Donald Thornton's boot camp brand of parenting was far too demanding for their taste.  Others will see in him the focused dedication that black America needs more of.  None the less the take away here is that the Ditchdigger's Daughters accepted their fate, rolled up their sleeves, dug in, and got busy building successful lives.  Yvonne Thornton herself states:
"I believe it is time for the black race to ’show what we are capable of doing.  The testing will surely go on for the next generation and the next, but each time we meet the test we'll climb another rung of the ladder until finally we arrive at parity, having earned our place, rather than pleading or demanding that it be given to us."

DDD is turning into a small cottage industry.  Since the book's publication in 1995 it has received much acclaim as a Literary Guild Selection and a Pulitzer Prize nominated book.  A for television movie was made with Carl Lumbly portraying Donald. The Kensington Publishing version has a new introduction by Dr. Yvonne Thornton on the book's evolution.

Readers are advised to dig in and enjoy, and to listen up and listen carefully to this ditchdigger's daughter.  Thornton is a woman who has walked this walk and knows of which she speaks.