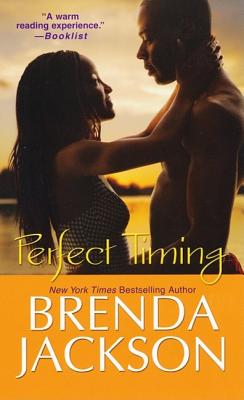 Read a Description of Perfect Timing

Perfect Timing was a decent read, imprinted with Jackson's unmistakable writing style. I am a fan of her, and have read most of her BET Arabesque romance books and her previous full-length novel, Family Reunion. While Family Reunion was riveting from start to finish, Perfect Timing lacked the same impact. The various scenarios and issues were, for the most part, predictable in their setup and eventual outcome; this detracted from the book's initial promise.

I liked the portrayal of Mya and Garrett's marriage. However, the end result of Garrett's dalliance with Paige was anticlimactic. For all the care that Jackson took in setting up Paige's scheming nature, the aftermath was a letdown. I was expecting some rabbits to boil on the stove instead of what actually happened. Mya's reaction to the entire affair was very believable and added a dose of appreciable reality to the situation.

Equally disappointing was the rift-causing event and subsequent reconciliation between Mya and Maxine. The allegedly heavy secret that had caused the friendship to become strained prior to college turned out to be a minor thing. Again, I was excitedly riding the crest only to have the wave abruptly flatten. Both the Garrett/Paige debacle and the Mya/Maxine peacemaking could have been expanded more.

The most engaging part of Perfect Timing involved the budding romance between Maxine and Christopher. These two characters were the best developed in the whole book, and Jackson did a commendable job in portraying both of their emotions against the backdrop of their lifestyles. Christopher was a very sensitive and compelling character. Maxine had the right amount of vulnerability and independence. The only fly in the ointment was the attempted blackmail of Christopher and one of his previous paramours. The blackmail scene didn't ring true. There was only one picture, and it was sent only to Christopher? No threatening letters? No phone calls? This entire side storyline fell flat and could have been removed without disturbing the integrity of the book as a whole or Christopher's romance with Maxine in particular.

My final concern with this novel was the number of scheming women it contained. Even Mya and Maxine did some low-level conniving in order to get what they wanted. While there are women who have no qualms in going after unavailable men (married, etc.) or men who are not interested in a committed relationship, most women can, and do, achieve their goals without trying to trap a man and/or hurt the other women in his life.

Brenda Jackson keeps true to her craft in the sizzling sex scenes, which are enough reason to buy Perfect Timing. The plot moves steadily, and the roller-coaster ride of logic vs. emotion fuels it to the expected happy ending.