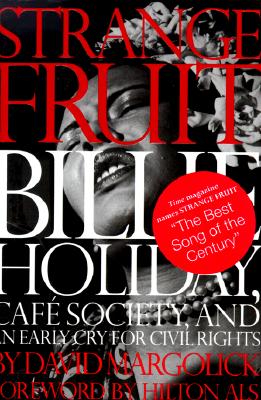 "Anatomy of a Mind Blowing Song"
One of the most deeply satisfying and thought provoking books traces the anatomy of a rarely remember song from 1939. David Margolick's Strange Fruit: Billie Holiday, Caf’ Society and an Early Cry for Civil Rights is a comprehensive history and examination of this iconoclastic, mind blowing song, and all of the cross currents that played a role in its existence and success.

Time Magazine hailed Strange Fruit in 1999 as the "Best Song of the Century", but "Most Provocative" or "Most Unsettling" might more accurately reflect Strange Fruit's artistic impact and true social standing. SF is most often remembered as a signature song for star crossed chanteuse Billie Holiday and its lyrics are often used as a shorthand expression of her life and spirit. While an important song, it has been infrequently heard in recent years, and has existed in a virtual "artistic quarantine" since Holiday's death in 1959 at age 44. SF's highly charged lyrics are greatly responsible for its notoriety.

Southern trees bear a strange fruit,
Blood on the leaves and blood at the root,
Black body swinging in the Southern breeze,
Strange fruit hanging from the poplar trees.
Pastoral scene of the gallant South,
The bulging eyes and the twisted mouth,
Scent of magnolia sweet and fresh,
And the sudden smell of burning flesh!
Here is a fruit for the crows to pluck,
For the rain to gather, for the wind to suck,
For the sun to rot, for a tree to drop,
Here is a strange and bitter crop.

Holiday is usually misattributed as SF's composer and lyricist (a mistake that she fostered), but SF's "father" was New York City schoolteacher and activist Abel Meeropol, saying, "I wrote "Strange Fruit" because I hate lynching and I hate injustice and I hate the people who perpetuate it."

Composed in 1939, the same year "A Tisket, A Tasket" was introduced by Ella Fitzgerald, Strange Fruit was debuted by Holiday at New York City's Caf’ Society Night Club. SF was an inflammatory and dangerous song, and there were few venues where it was safe to perform. Thus author Margolick shrewdly and skillfully offers readers a "big picture" examination that intertwines the song with all of the contexts that influenced its evolution: the nightclub Caf’ Society; club owner Barney Josephson; Lady Day Holiday; the prevailing racial climate that nurtured lynching; and the zeitgeist in America and worldwide, that alternately embraced and feared the song. "Lynchings -- during which blacks were murdered with unspeakable brutality, often in a carnival-like atmosphere and then, with the acquiescence if not the complicity of local authorities, hung from trees for all to see -- were rampant in the South following the Civil War and for many years there after. According to figures kept by the Tuskegee Institute -- conservative figures -- between 1889 and 1940, 3,833 people were lynched; ninety percent of them were murdered in the South, and four fifths of them were black. Lynchings tended to occur in poor, small towns -- often taking the place, the famed newspaper columnist H. L. Menken once said, "of the merry-go-round, the theatre, the symphony orchestra." They involved either the whole community or a cabal of vigilantes, often in disguise. And they were meted out for a host of alleged offenses--not just murder, theft and rape, but for insulting a white person, boasting, swearing or buying a car. In some instances, there was no infraction at all; it was just time to remind "uppity" blacks to stay in their place."

The United States and its non black citizens became inured to the horror of this uniquely home grown form of cruelty. Despite vigorous efforts by the NAACP and first lady Eleanor Roosevelt, no federal anti-lynching laws were enacted. Sociologist Gunnar Myrdahl pointed out "Even in the North, some people have ceased to be concerned when another lynching occurs, and they jest about going South to see a lynching".

The experience of lynching was probably the closest and most accurate metaphor for the Black American experience. Journalist Vernon Jarrett remembers growing up, "There were stories of white people fighting among themselves for the dead man's fingers or toes, or pickling his penis and keeping it in a jar in the local barbershop. Or stories of white people putting on their Sunday best to attend lynchings, or even their uniforms from World War I or the Spanish American War, as if racism was real patriotism: "I am a real American, I lynch black folks. I keep them in their places."

Despite the gravity of its topic Strange Fruit, the book, is easy, fast and enjoyable to read. Margolick's exposition is interspersed with commentary from celebrated and ordinary folks on Strange Fruit's impact on their lives. Vernon Jarrett comments that hearing Strange Fruit "enhanced my commitment to changing this stuff [lynching and racism]." The book's beautiful production values, as shown through the type face, photographs, half tone back ground graphics, underscore its appeal to thinking persons of good will, and also demonstrate the author's and publisher's reverence for the song.

Strange Fruit was a song of unimaginable power and listeners reacted in a variety of ways. It was often shunned because many listeners resented being forced to think about racism and lynching in an entertainment context. Most listeners did not know how to react, yet were still deeply affected, for SF was like an unexpected spritz of perfumed penicillin to combat the germs of racism, the virus of lynching and the cancer of hate.

Even within the black community reaction varied. Paul Robeson felt the Strange Fruit portrayed blacks as victims. Other blacks feared SF would incite even greater acts of racial hatred. "Unless you interpreted it for [people], they didn't know what it meant. [Strange Fruit] could have been watermelons growing on the ground", one Pittsburgh Courier columnist commented.

While incidents of lynching are rarely reported today, assaults and atrocities on the black, the poor and the seemingly powerless continue unabated and the proof is seen in recent years in Jasper Texas, Los Angeles and in New York City among other places

Few songs merit the stringent examination of an entire book devoted to their existence and evolution. Challenge yourself to think of another. Strange Fruit is one strong reason why the current crop of book offerings is so rich and exciting. Perhaps the best effect of this book is to jar people of good will out of complacency and to spur a re thinking of how little things have changed. As Maya Angelou said when asked to comment on progress made since the 1963 March on Washington, only the externals have changed.