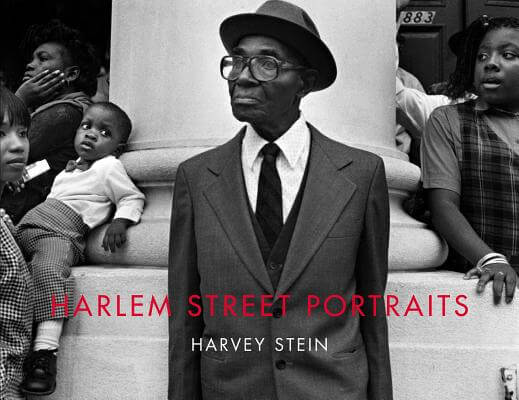 “With a population of nearly half a million people, Harlem is America’s most celebrated African-American neighborhood. Its rich past and historical importance have made a unique contribution to our national popular culture…
Photographer Harvey Stein documents the humanity and spirit of the people of Harlem in 166 beautiful photographs taken over 22 years…. The images are mostly close-up portraits that reveal the friendliness and warmth of this city’s inhabitants...

What may at first appear to be a casual encounter becomes a personal, intimate record, a meaningful collaboration between photographer and subject. Stein’s photographs capture and celebrate the Harlem spirit.”
—Excerpted from book jacket

Harlem has been a predominantly African-American neighborhood since the dawn of the 20th Century, when the mass migration by descendants of slaves from the rural South flooded many a metropolis above the Mason-Dixon Line. By the Twenties, this section of Manhattan had blossomed into an artistic mecca and home to many black intellectuals, writers, painters, musicians and dancers.

Spanning that decade, the Harlem Renaissance marked a period of explosive creativity aborted only by the onset of the Great Depression. Nevertheless, in the wake of World War II, the region was resurrected as a hub of cultural, religious and commercial activity, and continued to play that pivotal role over the intervening decades.  Today, however, Harlem is at risk of losing its identity because of the influx of whites as a consequence of the gentrification which has accompanied skyrocketing real estate prices. For this reason, Harvey Stein’s Harlem Street Portraits couldn’t be more timely.

The book is basically a collection of striking, black & white photographs which the talented shutterbug took of residents between 1990 and 2012. His impromptu snapshots capture colorful subjects with a tremendous range in terms of fashion tastes, personal interests and even emotions.

From a Freemason rocking a funky fez, to a flag-waving patriot, to a boy hugging his basketball, to an aspiring ballerina in a tutu, to churchgoers strutting in their Sunday best, this visual history of a rapidly-disappearing demographic weaves a telling tapestry of a once-cohesive community.