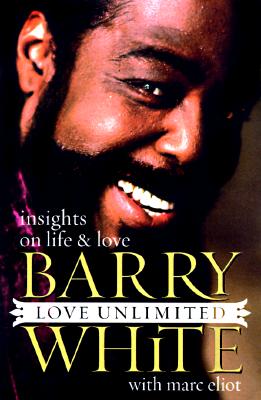 Read a Description of Love Unlimited: Insights on Life and Love

The man is known by many names: The Maestro; The Icon of Love; The First, Last and Everything! In his new autobiography, recording legend Barry White lives up to his exalted titles, making Love Unlimited: Insights on Life and Love, the most exciting and interesting of the recent spate of celebrity biographies.

Readers will enjoy Love Unlimited as a book version of White's generous, swirling and keenly arranged compositions. The content and spirit of the book is earnest and genuine, and reflect White's voice and sensibility. But most important, Love Unlimited provides a seldom seen look at the creative process in action, and the qualities of believing in oneself that are imperative to success in any field.

"I couldn't understand why no one was calling for my services anymore…And because I didn't have enough knowledge and experience, I did the worst possible thing I could -- I started to question my own abilities. I had to overcome a lot of self doubt before I was able to realize that no matter who you are, no matter how good you can be, you are going to hit on some days and miss on others."

White had a lot of growing up and believing to do before he could claim his success. He was born and raised by his beloved mother, in the dog-eat-dog chaos of South Central Los Angeles. His brief stint in jail as a juvenile offender (and the epiphany he experienced to the tune of Elvis' "Now or Never"), helped him to avoid the early death fate of his gang banger brother. He expresses thanks to the juvenile court judge who sentenced him in the book's Acknowledgements section.

White experienced ten years of struggle and poverty with a wife and four children, before he became a successful record producer. Despite his commitment to a career in music, White supported himself during these super thin years with a series of pay-the-rent gigs (washing cars, retailing, etc). Even though he existed only on the fringes of the L. A. music scene in the 1960s, he prepared himself for success by keeping his eyes open, jumping on every opportunity-large or small, listening, observing, making friends and contacts, gaining the respect of his peers, and taking everything in.

In the early 70's White's persistence, and belief delivered the big payday and professional visibility, with his producing hits for the group Love Unlimited. But despite having "arrived" hurdles still remained. One of the most intriguing sections of Love Unlimited describes the struggle between White's powerful creative instincts, (which directed him to record his own songs), versus his knowledge of how shabbily singers are regarded in the recording industry.

"I just didn't want to be known as a singer. In those days singers carried a stigma: They were either "Stupid" or "leeches", or "crybabies." No one in the industry respected them as artists. Out of the studio performers were considered the bottom of the barrel, and I didn't want any part of it. I really wanted to guide and develop other artists, like Love Unlimited, rather than be one myself."

Luckily for music (and book) lovers White's creative drive won out, and he went on to enjoy phenomenal success with an enviable string of gold albums, and number one hits on both the R&B and pop charts.

White's confidence and honesty shine through in discussing how his music reflects both the masculine and feminine sides of his nature. "Love Unlimited had succeeded in expressing my "female" side. Now I was intent on finding an artist who could properly express the male side of my musical romantic equation."

This desire led to recordings that demonstrated the full breadth of White's vision of romance, love and sensuality. During this golden era he accessed a bottomless well of talents -- as a composer, arranger, vocalist, producer, orchestra leader, and performing artist. White was also the guiding force behind three distinct entertainment franchises: Love Unlimited, the vocal group ; The Love Unlimited Orchestra; and White's own, formidable talent as a singer.

Among the group of recently reviewed celebrity biographies White is clearly the best at letting readers in on the experience of his creative process. "It was one of the most amazing moments of my life. I had that feeling one gets very rarely in life, when the creative spark ignites the flames of love and your house of passion goes up in one glorious blast of hot flames. I was with the woman I loved, writing music she had inspired, music that in turn brought us closer together and deeper in love, and I couldn't get enough. I never wanted that night, that feeling to end. I felt engulfed and liberated all at once. I was in love and love became the grand theme of my life, my work, my soul and my bliss. Right then and there at that precise moment I knew I had made it: I had become successful in the most profoundly meaningful way possible."

Love Unlimited is joyful, enjoyable reading and is virtually the next best thing to a Barry White concert. White's candid and sensitive approach to his autobiography should encourage even greater examinations of African American creative processes, contributions and sources of inspiration. A word to the wise: Do not deny yourself the pleasure of listening to the Maestro's recordings as you read Love Unlimited.