Book Review: Medical Apartheid: The Dark History of Medical Experimentation on Black Americans from Colonial Times to the Present 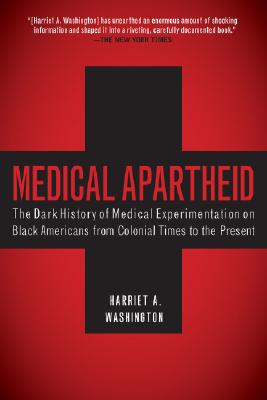 by Harriet A. Washington

Read a Description of Medical Apartheid: The Dark History of Medical Experimentation on Black Americans from Colonial Times to the Present

’The experimental exploitation of African-Americans is not an issue of the last decade or even the past few decades. Dangerous, involuntary, and non-therapeutic experimentation of African-Americans has been practiced widely and documented extensively at least since the 18th Century... The problem is growing’ No other group as deeply mistrusts the American medical system.

These subjects were given experimental vaccines known to have unacceptably high lethality, were enrolled in experiments without their consent or knowledge, were subjected to surreptitious surgical and medical procedures while unconscious, injected with toxic substances, deliberately monitored rather than treated for deadly ailments, excluded from lifesaving treatments, or secretly farmed for sera or tissues that were used to perfect technologies such as infectious disease tests.’

In taking the Hippocratic oath, every new doctor pledges ’Never to do deliberate harm to anyone for anyone else's interest.’ However, Hippocrates, the father of modern medicine, must be spinning in his grave, given the rampant ethical violations of his sacred doctrine being routinely perpetrated by physicians in the United States.

Most people only think of the infamous Tuskegee study of subjects with untreated syphilis when it comes to the exploitation of blacks as guinea pigs. But such experimentation by medical researchers neither began nor ended with that shocking case.

In recent years, on a couple of occasions, I have been skeptical about physicians I felt were doling out different brands of medicine based on their patients' skin color. Frustrated because I had neither the time nor the wherewithal to pursue my hunches, I couldn't confront anyone or go public based only on anecdotal evidence.

For this reason, I am so grateful that Harriet A. Washington has written Medical Apartheid: The Dark History of Medical Experimentation on Black Americans from Colonial Times to the Present. For this groundbreaking book confirms my suspicions by addressing the disparate methodologies currently being employed with patients presenting the specific symptoms I had been concerned with.

Ms. Washington, a Harvard and Tuskegee-trained scholar in ethics and journalism, conducted exhaustive research in order to be able to shed light on the country's racism in the name of scientific research. Among the brutalities uncovered here by the author is proof that ’black women have been systematically sterilized without their consent, and that ’the brains of African-American children as young as six’ have secretly been ’surgically excised.’

She illustrates how this disregard for the well-being of blacks began during the days of slavery when Africans en route to the Americas were ’thrown overboard if signs of disease were found’ by the ship's surgeon. By the conclusion of this compelling opus, she makes it abundantly clear that just as America has a two-tiered criminal justice system, it has totally different quality healthcare systems when it comes to blacks and white citizens.

So, when you encounter an African-American who harbors a deep distrust of doctors, that might not be paranoia but simply a sensible survival instinct still intact.

Read Anchor’s description of Medical Apartheid: The Dark History of Medical Experimentation on Black Americans from Colonial Times to the Present.