Book Review: A Reason To Believe: Lessons From An Improbable Life 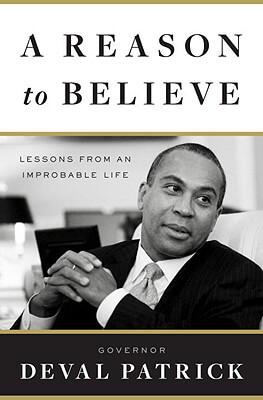 Read a Description of A Reason To Believe: Lessons From An Improbable Life

"My life is often described as ‘improbable' because I grew up in a broken home and in poverty… Of course, I acknowledge the unlikelihood of my good fortune. I also recognize the hard work and discipline that have made it possible.

But above all, I cherish and celebrate the many people who have taken moments to enlighten me, to renew my ideals, and to spur me to action. There have been teachers and preachers, supervisors and colleagues, friends and family… who through their words or deeds have delivered transcendent messages about life, faith and friendship… They have made all the difference.

Deval Patrick and his sister Rhonda were raised on the South Side of Chicago by a mom who'd been abandoned by their deadbeat dad for the proverbial "other woman" and a "love child." Life is tough enough for a young boy growing up in the ‘hood without a father, but it must been even more challenging when he's a famous jazz musician (saxophonist Pat Patrick) always on tour who rarely visits or sends any child support.
This was precisely Deval's plight during his formative years, a predicament which undoubtedly lowered his odds of ever making it out of the ‘hood. Nonetheless, thanks to his applying himself academically combined with the support of a devoted mother, grandparents and teachers, he managed to earn a scholarship to a prestigious boarding school by the time he graduated from junior high.

Deval subsequently attended Harvard College and then Harvard Law School, before working as an attorney for the NAACP and in the Clinton Administration. In 2006, he ran for political office for the first time when he entered the race for Governor of Massachusetts.

Although a virtual unknown, he emerged victorious at the end of a hard-fought campaign. And he repeated that unlikely feat just last fall when he made history by becoming the first African-American ever reelected the governor of any state in the union.

All of the above achievements and many more are recounted in glowing detail in A Reason to Believe: Lessons from an Improbable Life, an autobiography which essentially amounts to an exercise in humility. For at every turn, the appreciative author credits this or that relative, teacher, mentor or benefactor for playing a pivotal role at each step as he scaled the ladder of success.

Along the way he also married and had a family, carving out the sort of quality time for his daughters that he had himself never enjoyed with his estranged dad. The icing on the on the cake is that, ultimately, Deval not only forgave his father before he died but took him into his home when he was down on his luck.

A moving memoir by an unassuming overachiever-turned-altruistic role model well worth emulating!
Read Knopf’s description of A Reason To Believe: Lessons From An Improbable Life.