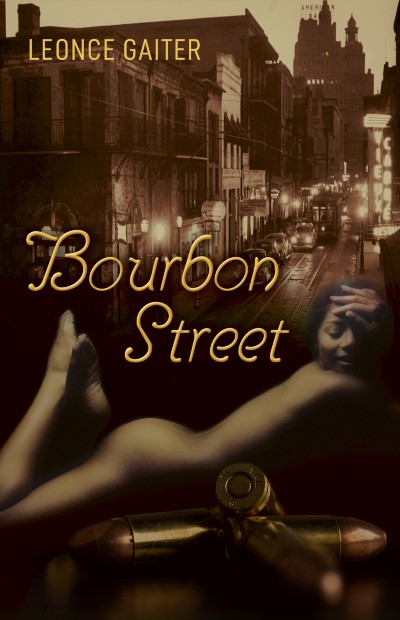 Read a Description of Bourbon Street

It has been a long while since I read a book as complex and gorgeous as Bourbon Street written by Leonce Gaiter. A novel which explores the spectrum of inner naked essence of human nature, Bourbon Street was a sheer joy to read from beginning to end.

Deke Watley is a small time Texas gambler. One day, in 1958, out of the blue, Deke receives an invitation to play in a high stake poker tournament in New Orleans. Deke does not know that this trip will force him to come to terms with a guilt that he's been running away from for years.

Alexander Moreau, the son of a white gangster, August Moreau and a black prostitute, Christine, is an enigma. Alex is cherished, feared, and damned in New Orleans. Memories of his mother's death, yearning for his father's love, Alex are caught between two worlds. He longs for acceptance and Alex will use anything or anyone to get it.

Finally there's Hannah, a woman who Deke met and fell in love with when she was 16 years old. Deke betrayed her and now that he's seen her again in New Orleans, wants a chance to make his wrong right. Hannah, of today, has complications, one being, she is August Moreau's common law wife and Alexander's stepmother. All of these people are seeking to be free; either from their past or their present lives. In ways that none of these people understand, individual freedom comes with blood and tears that is not easily wiped away.

I concluded my reading of Bourbon Street with one truth shining in my head: Gaiter is a wordsmith. The language of Bourbon Street is striking. Gaiter built a narrative that is unblinkingly honest and real; yet, seen through the eyes and told through the mouth of an old poet. He immediately captured the sweet, humid, sticky atmosphere of New Orleans. Quickly, but unhurriedly, constructed characters that I could thump and have flesh envelope my fist. Gaiter created human beings with souls, able to be loved and inflict great pain. Consisting of blood, heartbreak, and violence; the pages stink of spent up passion and regrets. I am not ashamed to state that I wallowed in this story like a pig in slop.

As I stated earlier, the characters are superb. One character held my attention like no other; Alexander Moreau. Alexander is the type of character that is unforgettable and takes on a life of his own. Alexander could be considered a throw back to the old "tragic mulatto" stereotype: confused, not knowing if he's black or white. Gaiter takes the "tragic mulatto" type a step or two further. By making Alexander the son of powerful white man who everyone is afraid to cross; Gaiter amplified the scorn people, both black and white, had for Alexander. This was an effective device because it seemed to magnify Alexander's emotion and confusion. Alexander does not know how to give love or receive it, yet, he is missing it. Tender, funny, sexy, and violent; Alexander is a mass of contradictions. It is those contradictions that make him fascinating.

Bourbon Street took me back to the days when I was first introduced to literature, a time when I got through a Shakespeare play for the first time actually understanding and appreciating the beauty of the language. Those days also marked the beginning of a long lasting love affair I was to have with William Faulkner. It was the time of my literary awakening. Bourbon Street brought all of the fresh excitement of those days back to me, for it is exquisite.