Book Review: Out of Bounds: Coming Out of Sexual Abuse, Addiction, and My Life of Lies in the NFL Closet 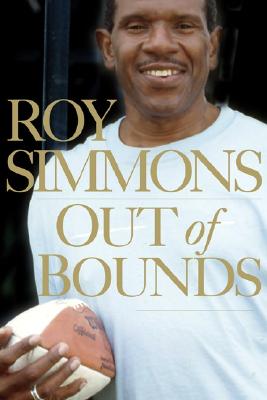 by Roy Simmons and Damon DiMarco

Read a Description of Out of Bounds: Coming Out of Sexual Abuse, Addiction, and My Life of Lies in the NFL Closet

Roy Simmons played in the NFL for seven years, enjoying an enviable career which began with the New York Giants and peaked in 1984 when he was one of the famed ’Hogs' on the offensive line of a Washington Redskins team that went to the Superbowl. At one point, Roy seemed to have it all. Not only fame and fortune, but he was expecting a newborn baby with his fianc’e, Sheila, the childhood sweetheart he called ’the love of my life.’

Unfortunately, the two never married. In fact, he abandoned his daughter entirely, leaving his ex to raise the little girl alone. For not only had Roy been shamelessly two-timing Sheila with other women, but he was also very busy on the down-low, compulsively seeking out secret liaisons with homosexuals in parks, gay bars, bathhouses, men's room stalls, anywhere, anytime it didn't conflict with his gridiron schedule.

In addition, Roy had a pretty awesome narcotics habit, over-imbibing in everything from alcohol to amyl nitrite to weed to coke to crack. So, it's not surprising that before time he bottomed out, he found himself broke and out of football, homeless, on food stamps and shoplifting, stabbing a drug dealer, and dressing in drag to satisfy strangers at $20 a pop as a male hooker.

What Roy didn't know till it was too late to apologize to his innumerable, unprotected sex partners was that he was HIV+ and spreading a lot more than love. Anyhow, this Prodigal Prostitute has apparently finally found God, and just as importantly, a book agent, and a trio of ghost writers. And if you're interested in the sordid details of what Roy's life in the closet was like ought to read Out of Bounds, a memoir which is, quite frankly, a strikingly graphic and unapologetic memoir.

While his co-authors might really be the ones responsible for the autobiography's frank tone, it is only Simmons himself who emerges as unsympathetic at the end of this explicit recounting of his self-destructive road to Hell and back. Sad that the first openly-HIV NFL star would have to be a guy that's so unlikable, his recently being Born Again notwithstanding.

Read Carroll & Graf’s description of Out of Bounds: Coming Out of Sexual Abuse, Addiction, and My Life of Lies in the NFL Closet.