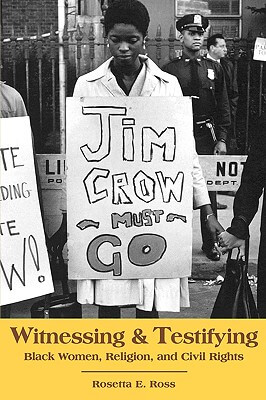 Read a Description of Witnessing and Testifying

At the dawn of this new millennium when the "bimbo-ization" of American women is in full flower it is instructive to look back to times when women were the primary exercisers of the "faith muscle", and to explore how they marshaled unknown forces of strength and practical action to advance causes born in their spirits. These images seem far removed from those of video vixens who strut their stuff on BET, yet these times were not so long ago. In her book Witnessing and Testifying: Black Women, Religion, and the Civil Rights Movement author Rosetta E. Ross offers an impeccably researched examination of how key women in the Civil Rights movement exercised their faith muscles despite (or perhaps because of) the climate of injustice that surrounded them.

All women included in the book gave strong examples of Witnessing (asserting that she has personally experienced God's provision or other intervention) and Testifying (telling stories of divine intervention). Their profiles are preceded by brief biographies of foremothers in the struggle, Sojourner Truth and Nannie Helen Burroughs. Sojourner Truth is particularly fascinating in her example of the presence of God in her life, how God guided her actions, and how she flexed her faith muscle.

The intense scrutiny of how these women put faith into action is the best aspect of Witnessing and Testifying. The book is a virtual instruction manual of how to take faith out of the realm of the mysterious and break it down into practical actions that readers can apply to their own lives.

The civil rights "sheroes" embodied the purest and most selfless examples of caring for fellow human beings. Ella Baker, an architect of SNCC and SCLC, stated that her work for freedom was for "a larger freedom that encompasses all [hu]mankind’I have tried to work for a cause’the cause of humanity. This is the cause that brings us together. The drive of the human spirit."

The sexism inherent civil rights organizations was a negative factor that female leaders encountered on a regular basis. Ella Baker "knew from the beginning that as a woman, an older woman, in a group of ministers who are accustomed to having women largely as supporters, there was no place for me to have come into a leadership role." Baker faced this wall pragmatically and graciously, saying "The competition wasn't worth it." She nonetheless remained focused on cultivating and bringing forth the talents of the masses.

Similar to Ella Baker the movement failed to leverage a powerful asset in the brilliant strategist Diane Nash. Nash was the mastermind behind the Freedom Rides and lunch counter sit ins. Andrew Young later commented that "It is not to [SCLC's] credit that we followed this model [of assuming and ignoring the contributions of female workers] with Diane."

Exercising the faith muscle via witnessing and testifying is an import and skill that is increasingly absent in today's society and thus, this book contains crucial information. The most valuable portions of Witnessing and Testifying show how these leaders were on the alert for the guidance of spirit in their lives. Septima Clark actively looked for Providence to guide her, and always gave thanks and credit to spirit for moving her from one place to another.

How these women overcame the fear that was inherent in their leadership also provides invaluable lessons. Diane Nash wrestled with fear on an ongoing basis, and was "wall to wall terrified" when confronted with the possibility of being jailed. "I made a deal with myself. I'd take five minutes during which I'd make a decision that I was going to either put the fear out of my mind and do what I had to do, or I was going to call of the sit-in and resign’I found the courage to put the fear out of my mind and keep going."

Often times the women who witnessed and testified were involved with the most tedious and least glamorous tasks in the movement. Ella Baker long recognized the importance of literacy to voting registration preparation. Both Ella Baker and Septima Clark believed in long term empowerment of local people, and in spreading the leadership among the people, versus the quick-shot of charismatic leadership. They often struggled against the pull of newsworthy and dramatic demonstrations versus gaining support for the long term grind of education (work often assumed by the female members of the struggle.)

Fannie Lou Hamer witnessed incomprehensible poverty and injustice as a child and endured horrible suffering and for living out her beliefs. Like her sisters in the struggle Hamer was not concerned with sound bites on the evening news, but was actively interested in local empowerment, and quality of life concerns. She established a Pig Bank, a most clever idea where pigs were passed on to a family in the community, allowed to reproduce and then issued on to others in need. Hamer also established the highly respected Freedom Farms cooperatives

It is admirable that author Ross presents women who embody a diverse range of religious perspectives, beliefs and orientations, including Diane Nash, a Roman Catholic, and Clara Muhammad, the first female member of the Nation of Islam. Clara Muhammad supported and championed Muslim Education despite her own limited formal education. She often represented her husband Elijah Muhammad during times of turmoil during the 30s and 40s. But unlike the other women profiled Muhammad's story seems tacked on in an effort to present a fuller universe of black female participation.

Witnessing and Testifying's most apparent shortcoming is that it reads like a doctoral thesis and thus will be most palatable to the academic segment of the reading market. Its information is invaluable, and the author and publisher would provide better service by reworking the book to make it more user- friendly to general interest readers. This level of high scholarship will not be every readers' cup of tea.

The examination of black women's religious beliefs as the foundation for their involvement with the Civil Rights movement presented in Witnessing and Testifying, begs the question, Where is black women's sense of social responsibility today? Author Ross responds: "Sometimes the absence of lively engagement by faithful people in public life results from the absence of moral exemplars. Presenting such accounts is a primary objective of this book. Perchance, it may be that the accounts included here also will remind us, encourage, and even inspire responsible moral practice for the common good that emanates from faith." This lofty and high-minded goal is consistent with a book about women whose lives and actions brought heaven closer to earth.

Ella Baker and the Black Freedom Movement : A Radical Democratic Vision
by Barbara Ransby
Click to order via Amazon