Book Review: In Another Place, Not Here 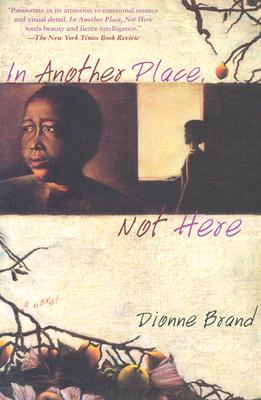 Read a Description of In Another Place, Not Here

Lest we forget that all African-American woman do not live in the United States of America, along comes Dionne Brand, a Trinidadian born now Canadian with a novel of the story of Elizete and Verlia, lovers who connect in Trinidad and Canada.  This is Ms. Brand's first novel, but she is by no means a neophyte writer having previously published this novel in Canada along with other nonfiction books, films, essays, short stories and poems.  The title of the book comes from her poem of the same name: "[i]n another place, not here, a woman might touch something between beauty and nowhere, back there and here, might pass hand over hand her own trembling life . . ." One wonders if this nonlinear tome isn't at least semi autobiographical.

Beckoned
The book is divided into two sections, and each woman tells the story from her perspective.  The first section is titled "Elizete, beckoned."   Elizete was physically abused as a child and sexually abused as an adult.   Before Verlia she was in a loveless arranged marriage working in the fields, cutting sugar cane.  Elizete's husband went mad after seeing her and Verlia making love. She is a simple educated woman who came alive after seeing Verlia the first time.   She transforms from emotionally dead to alive, playful, but still remains apolitical.  It is as if after never expressing her emotions, once released, they overflow.  She values grace and thinks that God is a man and is deaf, mute, and graceless.  She speaks in Trinidadian dialect and was drawn to Verlia because V wanted nothing from her, was brand new, and came from another
life.

Flying
Verlia telling the parallel story is Elizete's opposite.  She is intellectual, urban (having been raised in Toronto), an organizer and revolutionary activist.  She longs to live her life as a line from Che:  "[a]t the risk of seeming ridiculous, let me say that the true revolutionary is guided by great feelings of love." (p. 165) Yet the only feeling V has is of loneliness.  She loves in theory with revolutionary zeal but is tortured by love because she is afraid it will interfere with her revolutionary activities.  The expression of emotions only serves to paralyze her.  She is so serious that she thinks seduction only occurs between men and women.  She explicitly desires to be a dangerous bigmouthed black girl.  Her every movement, thought, and deed comes from her head and not her heart.  She engages in the appropriate revolutionary things: reading revolutionary works and beat poetry and listening to jazz and the blues.  She is as one of her favorite poets, Nikki Giovanni wrote, "so hip, so cool, so ephemeral, even . . . [her] errors are correct."

She is too cool, so much so that Elizete recognizes that Verlia is not from here.   When Verlia's theoretical love becomes too real, she flies away.  Her quick departure is reminiscent of Elizete's mother who was also gone quickly from her life.   Verlia grew up in Toronto and returned to Trinidad as an adult and Elizete did the opposite.  Of course Elizete's experiences as an immigrant worker in Toronto were vastly different from the middle class life that Verlia had described.  Ultimately this poetic work is about love and differences and told in a unique lyrical format without a fairy tale ending.  Different not only because of the locations, but also because of the class differences and differences on how to live and love.

Read Grove Press’s description of In Another Place, Not Here.