Book Review: Turning 15 On The Road To Freedom: My Story Of The Selma Voting Rights March 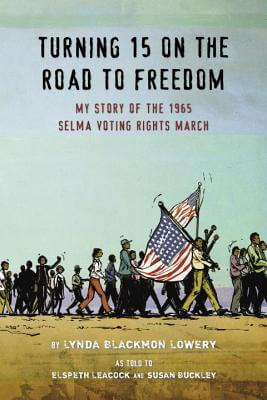 Read a Description of Turning 15 On The Road To Freedom: My Story Of The Selma Voting Rights March

“Jailed nine times before her 15th birthday, Lynda Blackmon Lowery refused to give up the fight for equal rights. She was the youngest marcher on the historic 1965 voting rights march from Selma to Montgomery, Alabama. She vowed to make a difference—and she did.”

Lynda’s story of overcoming terror and winning one of our nation’s most important battles is eye-opening and inspiring—a memoir that brings us into the heart of the civil rights movement to offer compelling proof that young people can be heroes.”
—Excerpted from the Bookjacket

The recent brouhaha over whether or not LBJ was dissed in the movie Selma has unfairly shifted the focus from the brave marchers who had their heads cracked open by racist police to a U.S. President sitting safely in the White House hundreds of miles away. If you’re interested in an eyewitness account of what actually transpired at the Edmund Pettus Bridge back in March of 1965, I heartily recommend Turning 15 on the Road to Freedom.

As the title suggests, the author was a teenager when her grandmother first took her to hear Dr. Martin Luther King, Jr. speak at a church in their hometown of Selma. Lynda Blackmon Lowery was instantly inspired by the charismatic leader to get involved in the Civil Rights Movement, even though she was barely in her teens.

She initially served as part of the support team for high school students staging sit-ins at segregated places like lunch counters and movie theaters. But when Dr. King returned in 1965, Lynda declared herself ready to participate in acts of non-violent civil disobedience, too.

Consequently, by the time she would turn 15, she had already been arrested nine times simply for seeking rights equal to whites. While in jail, she was subjected to torture prohibited by the Geneva Conventions, such as the occasion when she was left to roast in a windowless iron sweatbox until she literally passed out from the heat.

Later, during the first Selma march nicknamed “Bloody Sunday,” Lynda was not only tear gassed but knocked unconscious with a billy club by a cop calling her the “N-word.” It took 35 stitches to stop the blood gushing from her head, yet neither the beating nor the wound could discourage the determined young lady from joining the march from Selma to the Alabama state capital in Montgomery two weeks later.

All of the above is recounted in vivid detail in this illustrated memoir aimed at young adult readers 12 and older. That target demographic makes sense, given Lynda’s age at the time of the demonstration and the fact that, as she says, “The Selma Movement was a kids’ movement.”

Selma, as emotionally and absorbingly recalled by an unsung hero who persevered in the face of vicious intimidation on the part of the police. 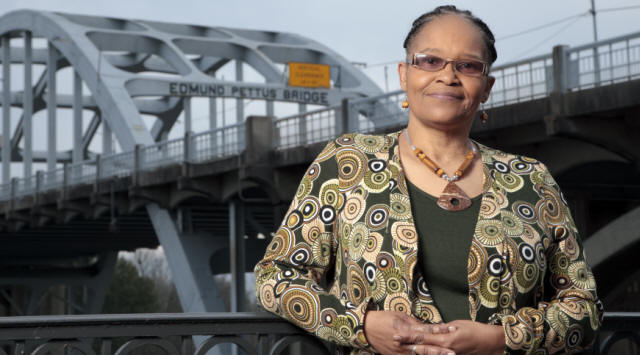 Read Dial Books for Young Readers’s description of Turning 15 On The Road To Freedom: My Story Of The Selma Voting Rights March.