Book Review: Pornified: How Pornography Is Transforming Our Lives, Our Relationships, and Our Families 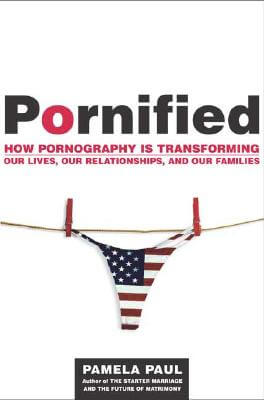 Read a Description of Pornified: How Pornography Is Transforming Our Lives, Our Relationships, and Our Families

’One need not oppose pornography on religious or political grounds to be nonetheless troubled by the pornified culture. Pornography not only damages relationships and interactions between men and women, professionally, and socially, it also makes women feel inferior and cheated, incapable of living up to airbrushed and surgically-enhanced perfection. Women are baffled that their husbands and boyfriends feel drawn to submissive or unrealistic images of female behavior.

Men have been sold on the idea that pornography is a harmless amusement and a natural pursuit. Not surprisingly, this message has come courtesy of the industry itself. But few men have stopped to consider what pornography does to men. It's time they took notice.

Pornography has a corrosive effect on men's relationships with women and a negative impact on male sexual performance and satisfaction. More than ever, it aids and abets sexually-compulsive in ways that can become seriously disruptive and psychologically damaging.’
’Excerpted from Conclusion

Has the explosion of pornography on the Internet infected American culture to the point where it has altered not only how most men and women relate to each other, but even the very nature of childhood? The disturbing answer to this troubling question is yes, at least according to Pamela Paul, author of Pornified: How Pornography Is Transforming Our Lives, Our Relationships, and Our Families.

For where, only a generation or so ago, XXX-rated material was generally stigmatized and considered sleazy, today it is no longer a source of shame but as mainstream as motherhood and apple pie. The purveyors primarily cashing in on this $4 billion dollar business are mega-corporations in the hotel, entertainment, and other industries.

Thanks to its easy accessibility and its pervasiveness, statistics reveal that pornography has infiltrated everyday life in profound ways. For instance, it is more and more frequently cited as the grounds for divorce, and sadly, it is increasingly blamed for distorting children's ideas about sexuality and for eroticizing pre-pubescents attempting to mimic the carnality they find online.

In no way does Pamela Paul come off as a prude, here, but rather as a concerned citizen simply pointing out some ways in which the sudden ubiquitous of smut has negatively affected us all. A valued service which ought to ignite healthy debate, and not just the familiar one between Bible thumpers and First Amendment advocates.

Read Times Books’s description of Pornified: How Pornography Is Transforming Our Lives, Our Relationships, and Our Families.