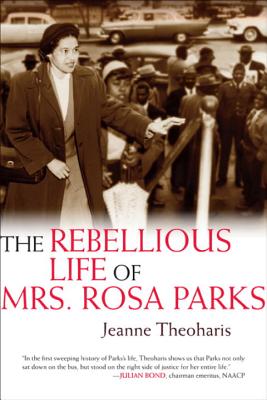 Read a Description of The Rebellious Life of Mrs. Rosa Parks

“Described by the New York Times as ‘the accidental matriarch of the civil rights movement,’ the Rosa Parks who surfaced in… nearly every [obituary] was characterized as ‘quiet,’ ‘humble,’ ‘dignified,’ and ‘soft-spoken.’ Her public contribution as the ‘mother of the movement’ was repeatedly defined by one solitary act on the bus… and linked to her quietness.

Held up as a national heroine but stripped off her lifelong history of activism and anger at American injustice, the Parks who emerged was a self-sacrificing mother figure for a nation who would use her death for a ritual of national redemption… This limited view of Parks has extended to the historical scholarship as well… [Today] Rosa Parks continues to be hidden in plain sight, celebrated and paradoxically relegated to be a hero for children…

What I have endeavored to do is begin the job of going behind the icon of Rosa Parks to excavate and examine the scope of her political life… [to] tell a fuller accounting of her life, a ‘life history of being rebellious,’ as she put it.”
—Excerpted from Introduction (pages viii, ix and xv)

Rosa Parks’ (1913-2005) contribution to the Civil Rights Movement has been conveniently reduced by most historians to that fateful day in December of 1955 on which she inspired the Montgomery bus boycott by refusing to surrender her seat to a white person. According to legend, the revered heroine’s act of civil disobedience came as a consequence of her just being tired rather than as a result of any political strategy or sense of social conscious.

Truth be told, Rosa Parks had already been involved in the African-American struggle for equality for over a decade. Even as a child, she picked up a brick to defend herself when a racist boy tried to bully her. And as a teenager, she fought back against a white man who was sexually assaulting her, explaining, “If he wanted to kill me and rape a dead body, he was welcome, but he’d have to kill me first.”

In marrying Raymond Parks, Rosa later found the perfect partner, a strong black man who shared her passion for questioning the status quo. Frustrated by the unfulfilled promises of American democracy, they joined the National Association for the Advancement of Colored People to lobby for voting and other rights long denied, and against Jim Crow segregation and the legal system’s tacit approval of the lynching and rape of blacks by whites.

In fact, Rosa was serving as the secretary of the NAACP’s Montgomery branch at the time of her boycott-launching arrest. Soon after being thrust into the national limelight, however, she and her husband paid a heavy price, losing their jobs and living with constant death threats until relocating to Detroit.

There, Rosa’s commitment to social justice continued, especially since she found the North to be anything but a Promised Land. Over the ensuing half-century she would speak out against police brutality and the Vietnam War, as well as against racial discrimination in housing, education and employment.

An overdue biography fully fleshing out a civil rights icon’s lifelong commitment to the progress of her people.