Book Review: Help Me To Find My People: The African American Search For Family Lost In Slavery 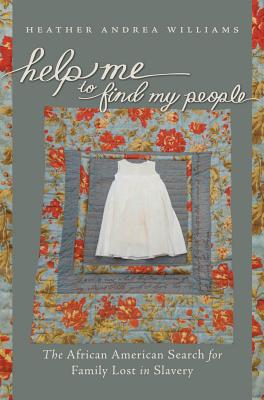 Read a Description of Help Me To Find My People: The African American Search For Family Lost In Slavery

“This is a book about slavery and family and loss and longing… It is about the forced separations of African-American families, about their grief and their determined hope to someday see each other again… It takes courage to look at the humiliation they suffered…

It is worth saying that this is a book about separation, resilience and survival, and about the texture and contours of despair… In the end, it is a journey into their feelings... The stories I recount are raw, emotional and dramatic... That’s what these people’s lives were.”
—Excerpted from the Introduction (pgs. xiii-xiv)

One traumatic side-effect of slavery left unaddressed by the history books is the tragic toll the evil institution exacted on the African-American psyche. After all, for hundreds of years, not only were black families routinely ripped apart at the whim of their owners, but males and females were even forced to breed like beasts of burden at the direction of avaricious traders.

However, in the face of such inhumane treatment, slaves never forgot the fond memories of loved ones, and always held tightly onto the faint hope of a sweet reunion one day. Proof of this is that in the wake of Emancipation, newspapers all across the country were flooded with classified ads placed by folks looking for children, parents, spouses and other missing relatives.

Help Me to Find My People: The African-American Search for Family Lost in Slavery is a heartrending opus which chronicles the desperate efforts of some of the inconsolable souls undertaking that noble quest. For instance, consider the urgent appeal published in a black newspaper on October 14, 1865 by recently-freed Charity Moss:

Author Heather Andrea Williams must be credited for conducting the painstaking research yielding such irrefutable proof that slaves did indeed feel some very deep emotions as a consequence of the horrors they experienced. Witness the words of Thomas Jones, as he recounts what happened to him as a child when he was told he’d just been sold to a faraway plantation:

“I was very much afraid and began to cry, holding on to my mother’s clothes, and begging her to protect me, and not let the man take me away… Mother wept bitterly and in the midst of her loud sobbings, cried out in broken words, ‘I can’t save you., Tommy; master has sold you, you must go.’ She held me, sobbing and mourning, till the brutal Abraham came in, snatched me away, hurried me out of the house where I was born, and tore me away from the dear mother who loved me as no other could.”

To add injury to insult, when his mom attempted to give her son a last hug goodbye on the porch, the cruel overseer struck her “with his heavy cowhide” and “fiercely ordered her to stop bawling and go back into the house.” To think that that awful image was his last for life of his beloved mother.

A touching collection of narratives chock full of sentimental reflections leaving no doubt that slavery was nothing more than a neverending nightmare for its millions upon millions of our African ancestors.

Read The University of North Carolina Press’s description of Help Me To Find My People: The African American Search For Family Lost In Slavery.