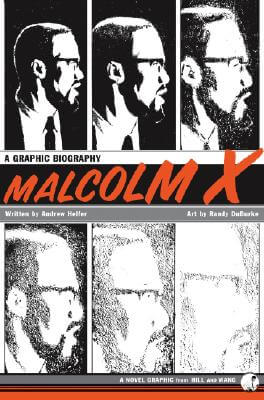 Read a Description of Malcolm X: A Graphic Biography

The age of multitasking needs better narrative history. It must be absolutely factual, immediately accessible, smart, and brilliantly fun. Enter Andrew Helfer, the award-winning graphic-novel editor behind Road to Perdition and The History of Violence, and welcome the launch of a unique line of graphic biographies.

If a picture is worth a thousand words, these graphic biographies qualify as tomes. But if you're among the millions who haven't time for another doorstop of a biography, these books are for you.

With the thoroughly researched and passionately drawn Malcolm X, Helfer and award-winning artist Randy DuBurke capture Malcolm Little's extraordinary transformation from a black youth beaten down by Jim Crow America into Malcolm X, the charismatic, controversial, and doomed national spokesman for the Nation of Islam. 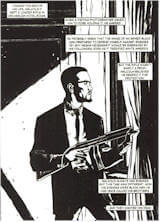 Quotes
"It's hard to tell a heroic tale about a flawed man who meets a violent end, then becomes a symbol that transcends his time. It's harder still to do so in a graphic format and avoid sentimentality, sensationalism or sycophancy. Yet Helfer and DuBurke convey the life of Malcolm X in a dignified, enlightening and entertaining manner. A controversial and provocative figure during his brief term of fame and notoriety in the '60s, the character arc of his life makes Malcolm a perfect subject for this medium, despite the inherent challenges. But Helfer, a veteran editor and vastly underrated writer, uses simple language to illuminate complex attitudes and actions. [DuBurke] does an inspired job of working within a claustrophobic format to serve up a virtual newsreel of Malcolm's life. Educators seeking vibrant material, as well as young Americans besotted with contemporary pop culture should snatch up copies of this brilliant volume."—Miami Herald

"This stirring graphic-novel-style biography weaves together black history with the personal story of the charismatic leader Malcolm X, whose confrontational approach to white racism was in marked contrast to Martin Luther King's policy of nonviolence. Helfer's text draws heavily on The Autobiography (1965), which Malcolm X wrote with Alex Haley, and DuBurke's realistic art, in black and white, with an average of six frames per page, visualizes the political struggle as well as the inner anger and turmoil. Far from reverential, the account includes chapters on Malcolm X's life as a hustler and his own disturbing racism. Close-up images, all set against a backdrop of the civil rights movement, capture crucial events in Malcolm's life: the teacher who tells him that as a black he can never be a lawyer, his passionate reading in the prison library, and his conversion to Islam. The book, which is part of the Novel Graphics line, evokes powerful visual drama and brings the big issues close in a way that is sure to interest YAs for biography assignments as well as discussion of the issues."—Hazel Rochman, Booklist 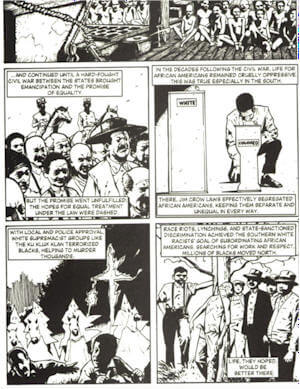 "The story begins shortly before his death, and the sense of tension established by his looming assassination is maintained throughout the book. Those already familiar with Malcolm X's autobiography will find a compelling retelling of his life, and those new to the subject will be introduced to a whirlwind tour of mid-20th-century history through the eyes of an influential figure in the Civil Rights Movement. The defining moments of Malcolm's life are presented here in a condensed format—his upbringing in the Midwest, his rowdy teenage years as a hustler in Boston and Harlem, and his time in prison, leading ultimately to his public life as a member of the Nation of Islam and the Black Muslim movement in the 1960s. The black-and-white illustrations give shape to the figures depicted through the use of shadows and high-contrast silhouettes. Many of the drawings have the quality of photographs that have been repeatedly photocopied until fine details disappear, lending a documentary feel to the imagery."—Heidi Dolamore, San Mateo County Library, California, in School Library Journal

"Helfer and DuBurke tell the story of Malcolm X's short life—his meeting with Dr. Martin Luther King Jr., the two leaders describing the opposite ideological ends of the fight for civil rights; and his eventual assassination by other members of the Nation of Islam (NOI)—in narration and detailed black and white drawings, sharp as photographs in a newspaper . . . From his slow slide into the criminal—moving from hustler to dealer to the head of a ring of thieves for which he was finally sent to prison—to his jailhouse conversion to Islam, Helfer and DuBurke don't shy from any part of their subject's life…Helfer and DuBurke have created an evocative and studied look at not only Malcolm X but the racial conflict that defined and shaped him."—Publishers Weekly

Andrew Helfer, as group editor at DC Comics, launched its Paradox Press imprint and the award-winning Big Books series, and worked on everything from Batman to The History of Violence.

Randy DuBurke's illustrations have appeared in The New York Times Book Review, Mad Magazine, DC and Marvel comics, graphic novels, and science-fiction magazines. He is the winner of the 2004 Coretta Scott King/John Steptoe New Talent Award for illustration. He lives in New York.