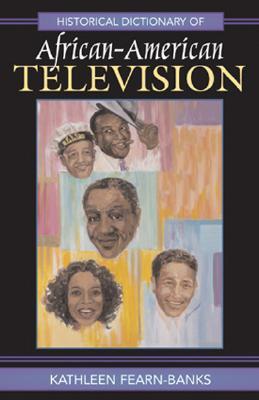 ’Most African-Americans who recall early television will say the first nationwide black-cast TV series they saw was Amos ’n’ Andy. The controversial comedy aired from 1951 to 1953.

Amos ’n’ Andy was killed by the NAACP and other black organizations for perpetuating negative stereotypes of black people and black life. A central character was Kingfish, who was without morals or ethics; he never had a real job and would cheat his best friend out of his last dollar. Andy was Kingfish's best friend, and he was so stupid that he allowed Kingfish to dupe him each episode.

The critics said the characters painted a negative picture of black life and black people. What is entertaining and what is demeaning to black people as a whole? What is laughable, and what should not be laughable? This conflict, especially among African-Americans, still exists today.’
’Excerpted from the Introduction

Although television is a relatively new medium, debuting in this country in the late Thirties, it is now generally acknowledged to be the primary socializing agent in America, after parents. Since TV plays such a significant role in the culture, especially the raising of children, one might like to examine the sort of images we've been exposed to over the years. This is particularly the case with African-Americans, who television has had a tendency to treat in stereotypical fashion.

Blacks have a special interest in monitoring the point of view presented by programming, because the insensitivity of the powerful decision-makers in the broadcast industry has resulted in considerable harm to their community. It is for this reason that the Historical Dictionary of African-American Television is an invaluable tool for anyone researching this area of expertise. With entries arranged alphabetically by show title and by surname of actors, this encyclopedic reference's user-friendly format makes it easy for anyone to avail themselves of its valuable information.

For instance, many people might not remember ’The Secret Diary of Desmond Pfeiffer,’ a short-lived sitcom set during the 19th Century which made light of slavery. When do you think this tasteless program aired? During the Fifties? The Sixties? No, it debuted in 1998 on the UPN network. The show starred Chi McBride as the title character, a kidnap victim who came to America by slave ship and ended up President Lincoln's butler.

In this dictionary's entry for Desmond Pfeiffer, the author points out that blacks picketed Paramount, complaining, ’The show trivializes our suffering, exploits our pain, and distorts history.’ The book's bi-partisan approach also includes UPN's defense, namely, that the show was ’political satire’ and that it neither disseminated ’negative images' nor found ’humor in slavery.’

To summarize, the Historical Dictionary of African-American Television contains a wealth of knowledge to share whether you're an academic or just curious about anybody black who has been on TV, whether Beulah, Nipsey Russell, Slappy White, Mother Love, or Art Duncan, the token brother who tap-danced away on the Lawrence Welk Show from 1964 to 1982.