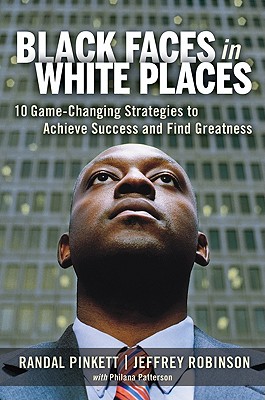 "What do we mean by Black Faces in White Places? It is more than just a numbers game and being the only person of color in a predominantly white environment. It is more than being subjected to racism and discrimination based on the color of your skin.

It is even more than being a ‘Black first.' It is, in fact, about pursuing greatness in ways that leverage your culture and ethnicity as assets, not as liabilities."

— Excerpted from the Introduction (pg. 9)

In his groundbreaking book, "The Rage of a Privileged Class," published in 1993, Newsweek Contributing Editor Ellis Cose eloquently illustrated how the American Dream has remained a dream deferred for many black college grads, even those with advanced degrees. The problem is that academic achievement is no guarantee of career success when it comes to one's chosen profession, given the existence of the "Old Boy Network" which continues to frustrate the aspirations of so many endeavoring to climb the corporate ladder.

As a journalist privileged to have access to many celebrities, a question I often like to ask in interviews with African-American captains of industry is how they managed to flourish in a predominantly white environment where so many other talented blacks have simultaneously failed to do so. Now, we finally have a satisfactory answer to that query thanks to Dr. Randal Pinkett, winner of Donald Trump's reality show The Apprentice.

For in conjunction with his longtime business partner, Dr. Jeffrey Robinson, Randal has written a viable blueprint for blacks trying to make it in corporate America. The book opens with a discussion of what the authors call the four dimensions, by which they mean the critical workplace issues African-Americans are apt to find themselves grappling with, namely, matters having to do with identity, meritocracy, society and opportunity.

Next, it goes on to delineate the "10 Game-Changing Strategies to Achieve Success and Find Greatness." Here, Randal and J.R. serve up sage advice culled from a combination of their own experiences and those of dozens of equally-accomplished black contemporaries they interviewed for the project. In a nutshell, their sacred 10 Commandments range from a stress on excellence to seeking out the wisdom of mentors to maximizing synergy and scale.

A helpful handbook designed for the average African-American armed with credentials yet in a quandary about how to flourish in the midst of a corporate culture tainted by intolerance in terms of skin color.