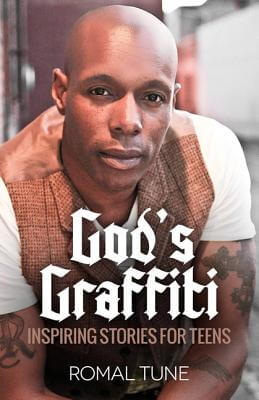 Read a Description of God’s Graffiti: Inspiring Stories For Teens

“I was raised in poverty, surrounded by drug dealers, gangs and community violence. My mother was addicted to crack cocaine and alcohol. I rarely went to church… [Yet] somehow God’s grace found and saved me when no one and nothing else could…

God’s Graffiti takes a look at young men and women in the Bible who overcame family and community challenges… Their stories give us some practical guidance for our own lives.

You have the ability to do amazing things through your faith in God, the courage to try something different, and the help of a few committed people.”
—Excerpted from the Introduction (pages xiv-xv)

Sadly, this is an era when the bulk of African-American children are being raised by single-moms with little investment in their lives on the part of their deadbeat baby-daddies. The absence of a father figure in the home ostensibly plays a big role in the high dropout, unemployment and crime rates presently plaguing the black community.

Romal Tune could just as easily been another statistic. After all, his mother was a crack head who never took him to church. And the absence of his dad meant he grew up on the streets where he got mixed-up with the wrong crowd and started dealing drugs by the time he was a teenager.

Miraculously, however, he found Christ and came to see the light and, benefitting from a new purpose, eventually graduated from both Howard University and Duke Divinity School. Today, Reverend Tune routinely ministers to the underserved as the founder of a couple of organizations dedicated to at-risk youth.

God’s Graffiti is a mix of memoir and motivational resource designed as a prescription to put juvenile delinquents on a proper path. The book’s title was inspired by the author’s observation of how the Lord often “takes what looks like a mess and transforms it into something amazing.”

What makes the opus very relevant is how it relies on scriptures to remind the reader of the humble beginnings which many a Biblical figure had to overcome en route to finally flourishing. Again and again, from the prostitute Rahab, to the abandoned Ishmael, to the orphaned Esther, to the unfairly accused Joseph, we see how these unlikely heroes ultimately conquered their considerable challenges.

For instance, Moses, the prophet who would part the Red Sea prior to leading his people to the Promised Land, was born a slave. To his credit, he survived being placed as an infant in a basket on which was allowed to drift away on the Nile by a mother desperate to save her son from certain death at the hands of the pharaoh’s henchmen.