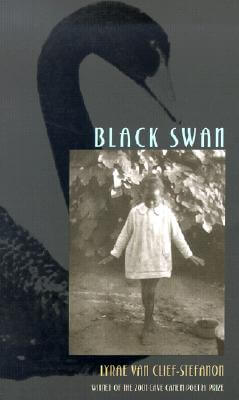 Black Swan by Lyrae Van Clief-Stefanon was published in 2002. This lapse of time annoys me because I somehow missed this rare "lotus blossom" among the fields of wild dandelions that proliferate in today's published poetry.

This review is not to crown Van Clief-Stefanon as the next big thing, but I would gladly bow before her in awe of her talent. The poetry in Black Swan approaches me like a forgotten song from the church of my childhood. The poems will sound hauntingly familiar to anyone who knows the strength that pain can etch upon your soul. Van Clief-Stefanon writes like a student of Langston Hughes, and offers poems that possess an emotional force rarely captured in modern poetry. Her words banged at my soul like a tambourine at a tent revival meeting. Her writing challenges both herself and her audience.

Van Clief-Stefanon writes in a vivid narrative presence that exceeds putting her stories on canvas and even goes beyond flashing her "soul songs" on a picture screen. Van Clief-Stefanon's work is so powerful it makes you drop to your knees next to her as she prays. I found myself engulfed in her backdrop of scenes. I could not discern if her poetry was from her memories, or if she had stolen recollections from her personal muse.

Black Swan is a collection built as her personal version of the fairy tale. It is a story of growing to love the beauty that often is akin to pain. The book is structured in three parts. Part I, the hatchling (or ugly duckling), addresses a young girl's physical and emotional violation when her surroundings are subverted. Her resilience is forged through tribulations as she fights with uncommon valor.

Van Clief-Stefanon's poems unmask the face of her torment. She shows no trepidation in her lyrical poetic offerings. In the poem "199 Lee Street" her sexual experiences are portrayed with angst:

An old address sings girlhood
when mosquito bites warned evening
and I marked their flat mounds
with fingernail x's, crickets scratched out
their first sharp notes, lost
in the house where I learned the red rug
against my chest, my knees
my tongue, and the back room's
stark patterned tile -

This is one mere sample of the saturation of imagery in her poetry. In Part II, her middle passage, she seeks atonement through spiritual augmentation. Her Pentecostal background was introduced in Part I, but here it seen as a possible source of redemption. Lyrae prays to be saved. Saved from contradictions of love and lust in her life. Saved from the men she wants to trust, but instead finds perfidy at their hands. Even in the sanctuary of the church, she finds a paradox in the pulpit.

His belly pushes
against the buttons of his three-piece
suit's black vest and I almost would
believe in the quiet hum
of "Come to Jesus," of every saint's
sweet supplication. How many times
would a girl hush the hop-skipped
rhythm of pulse, lie back
in sacrifice, take in salvation
that she can't hold. Pastor opens like
gardenia blossom every Sunday,

Whoa! I say this not because of the subject matter, but look at the delivery of this poem. Can you not feel this spot? The sanctity of this moment is stunning.

In Part III OF the Black Swan, she finds the beauty in the betrayal of her life. She is learning that her past experiences with sexual violation should not rob her of finding a physical expression of love. While her lessons are built on a foundation of survival, her poems in Part III illustrate her conclusion that life is worth living beyond just surviving. She has truly come into her own. What could have destroyed her now empowers her to speak in a beautiful voice.

The collection is as personal as any poetry as I have ever read. It is instilled with the particularly feminine alchemy of endurance. Van Clief-Stefanon's stories are told in the first person. This would normally have a tendency to build monotony, but her delivery is entrancing. I found myself creating an identity with her and I grew deeply concerned about the treachery and violations inflicted upon her.

What is more important to me is that I wanted to read her poems to anyone in the vicinity. I read over half the book aloud to my wife. When you find something this good you cannot wait to share. While Black Swan is not perfect in structure I challenge anyone to find a poem they do not like. I look forward to watching this Black Swan take flight.