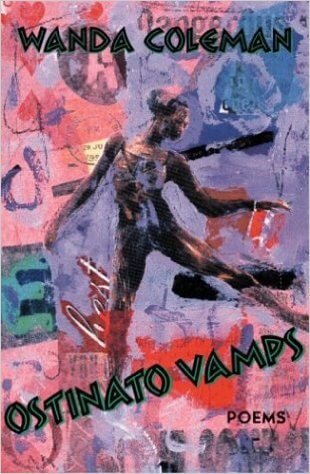 For those who are not familiar with Wanda Coleman, she is the award-winning author of Bathwater Wine and Mercurochrome.  She also gained considerable fame for what some considered the defamation of Maya Angelou. In 2002 she wrote an inflammatory review of the book A Song Flung Up to Heaven by Angelou, which she did not mince words saying that Angelou was hustling the public by offering such an uninspired work. This obviously caused quite the uproar. I mention this because Coleman has the same propensity for subjective truth in Ostinato Vamps.

i write on my body. messages for seers.
nakedness as unconventional as foreign as
armed combat with enemies on these shores.

i strive because i must. i love out of spite. i pledge
my allegiance to a standard of ashes, embers, and soot.
this is my anthem, a strident jig in the night

to that music beyond jazz

—from her poem “The African beneath the American“

Something clearly reaches out from her poems to shake the reader awake. Coleman is perhaps one of the most well versed modern poets with the usage of unusual idioms. This collection was not as verbally daring as the other two aforementioned books, although it still carried itself well. Her work rings with an intellectual street savvy. As an artist, she offers a vernacular dance of poetic movements that rarely fails to move her readers. Unfortunately this unusual style provides the highs and the lows of Ostinato Vamps.

Although she does take an occasional stab at humor with some of her poems, the collection is primarily darkened by the prevalence of cataclysms, despair, and anger. She really does a great job writing with these subjects. The unfortunate aspect of it all is her application of these subjects to the struggle of the people of color. I will stop short of accusing her writing a poetic declaration of despair. Her stories of the struggles she has seen are often poignant. But this did not fulfill my urge to read about someone who made good despite of his or her environment. The book is an 8mm movie of what Coleman seems to call the ghetto. My biggest complaint is that she follows the most common depiction of the ghetto as a modern Dante's Inferno.

The ghetto does not exist in a geographic area. It sometimes has nothing to with economic situations. On the contrary, it is a mind state that can exist in the White House, the crack house, or in our house. The ghetto is about struggling everyday and you are fighting an adversary that will never rest.

Coleman writing has a certain gusto. She takes chances in her presentation of her poems. Some of those chances led to poems (such as “Sorceress of Muntu” and “Night Widow Fugue”) which could be perceived as avant-garde ramblings lacking direction. However, I don't want to lose focus on a job well done, so my preference is not to stare at the cracks in the painting, but to absorb the beauty as a whole. That beauty radiates from Coleman's observations of her socio-political concerns, personal relationships, eroticism, and jazz. Her writing on these subjects is fearless. She uses these as subtitles for her story about the tenuous tug-of-war the subjects of her poems face. The stories she tells are historical, as well as visionary. Her ears and eyes are taking the pulse of the world around her. She uses that beat to set the tempo to her prosody.

Overall Ostinato Vamps is a documentary on the inner and outer struggles of Coleman's streets. Her illustrations may come across dark at times. This should not extract from the reality of what she writes. Clearly she is among some of the best poets of today. She has not just learned the lesson of the streets; she had also learned the technical characteristics of her craft. The inconsistency of her poetry is a symptom of the same human frailty that she writes about. Coleman still delivers a piece of work well worth reading.