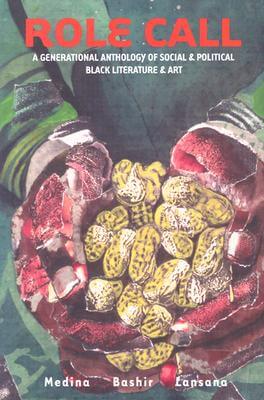 Read a Description of Role Call: A Generational Anthology of Social and Political Black Literature and Art

I encounter many literary anthologies that try to appease my appetite for new talent. But most of them fall short of their mark, and few of these collections are outstanding or memorable. However, now and then along comes a work that is truly illuminating, and "Role Call: A Generational Anthology of Social & Political Black Literature & Art" is such a work. It is a monumental undertaking by editors Tony Medina, Samiya Bashir, and Quraysh Ali Lansana, all of who are also accomplished and respected writers.

Perhaps it was their specific mixture of talent and taste that was able to bring out the best works of these dawning Black artists. The editors of this anthology relied not just on just word of mouth, familiarity, or market popularity when selecting new talent. The book's title is derived from the theatrical tradition of "Cattle Call" auditioning talent that seeks to be selected for a specific role. Submissions were collected through venues including the Internet, writer's groups, word of mouth amongst literati, conferences, etc. The artists included display perspectives that range from the traditional to the eccentric. All of them do an excellent job of serving up the many directions that black art may take in the future. There were many outstanding voices that were omitted in the effort to capture the essence of what the future holds for Black art, but the book is still very interesting.

The strength of the art in this anthology is varied and reflective of a group that is growing in their craft. There some works that stand out from the rest, but there are also some inclusions that left me annoyed at the usage of vital print space. The book could have been much thinner or a bit more focused on consistency relating to quality.

Overall, this collection holds it's on in comparison to others. "Role Call" merits inclusion with anthology notables such as; "Black Fire: An Anthology of Afro-American Writing" (Morrow; 1968), "Black Voices: Anthology of African-American Literature" (Signet Classic; reissued in 2001), and the recent work "Step Into a World: A Global Anthology of the New Black Literature (Wiley & Sons; 2000). "Role Call" sets itself apart from the "here comes another anthology" legion by operating from a sense of mission.

I interpreted that mission statement to be: "From the echoes of our forefathers, who among us today will bang the drum for justice, peace, equality, spirituality, and the love and respect we should have for one another? Who will stand, not for what is, but what is right?" This sense of purpose is what allows "Role Call" to stand on the shoulders of other great Black anthologies that preceded it. The editors adhered to this implied mission statement in selecting every piece. Whether the artists' works are literary, visual, poetic or theatrical, all themes accentuate and inspire evolutionary thought. They do not obscure what happened in our past, but place emphasis on where we should be tomorrow, while we pay homage to our past.

Regie Gibson, a well-known poet (and respected friend) critiqued a poem I wrote about the "revolution". I paraphrase by saying, "Leave the (explicative) revolution alone. If you did not stand on the front lines, then you are only giving a second hand point of view. Our place is not write poems about the revolution, we should be writing revolutionary poems. "The artists of "Role Call" speak of the "now", not "then". They excel in reflecting on the revolution of self-examination. They don't ask pointless questions, but they go ahead and establish what is our place in the world of today, not yesterday. This is the way the artists and editors of "Role Call" pay homage to our artistic foremothers and forefathers.

"Role Call" does not offer a full spectrum of every up and coming black artist, but it does a good job of giving a cross-section of artists that will create the echoes of tomorrow. Many of these artists are picking up the torch from the culturally conscious artists of yesterday -- the painters, poets, and actors, heroes and 'sheroes' of the black arts movement who worked hard to open up communication amongst Blacks about what was going on and what should be. The editors of "Role Call" are to be commended for their diligence in finding some of the voices that will echo in the young ears of tomorrow.

The voices and visuals of these artists have left an indelible, transcendental impression upon me and I am better for it. I hope that the artist who had the opportunity to be included in this notable collection use it as an inspiration to continue to work on their skills. While a few will applaud, there are still many who are silent, waiting for their growth as an artist. A good start is nothing more than the first step.