Book Review: The Revolution Will Not Be Funded: Beyond the Non-Profit Industrial Complex 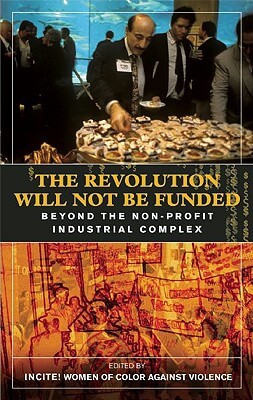 by INCITE! Women of Color Against Violence

Read a Description of The Revolution Will Not Be Funded: Beyond the Non-Profit Industrial Complex

’Many white-led social justice non-profits proclaim, in everything from their mission statements to their funding proposals, that they are committed to improving the social and economic conditions of the oppressed communities in which they operate. But’ the white leadership of the progressive philanthropy movement actually protects white wealth and undermines the work of oppressed communities of color’ They act as brokers between the capital and the oppressed people of color who were exploited to create it...

They simply help [the rich] manage their money- and assuage their guilt for having wealth accrued from the stolen and exploited labor of people of color’ More specifically, white people become more invested in protecting white wealth than in advancing oppressed people of color's movements to reclaim and redistribute wealth.’
’Excerpted from Chapter 5, ’The Filth on Philanthropy’

Have you ever wondered why poverty persists in America, despite the existence of so many incredibly wealthy charitable organizations, some of which boast billion-dollar endowments? For instance, after Hurricane Katrina, non-profit corporations undoubtedly benefited from a fund-raising bonanza, given that the entire country had been moved to open their wallets by the failure of FEMA and every other federal and state agency to respond to the disaster effectively.

Yet, here it is over 20 months later, and the poorest folks from the Gulf region remain unable to return to their homes and are probably permanently dislocated. To get a clue as to understanding the woeful performance of philanthropies, may I suggest The Revolution Will Not Be Funded: Beyond the Non-Profit Industrial Complex.

This anthology of revealing essays was edited by Incite!, a collective also known as Women of Color against Violence. This incendiary tome brilliantly blows the covers off the non-profit racket, indicting it as being in bed with a power elite whose primary interest is in maintaining the status quo.

As proof, the authors point out that in 1955 charitable giving totaled just $7.7 billion, but by 1998 (the last year that such statistics were compiled) that figure had risen to $175 billion. One of the unintended consequences of this generosity is that foundations now strategically direct how their grants get disbursed, which means that most money is allocated with strings attached.

Apparently, some charities even masquerade as progressive while pushing an arch-conservative agenda, such as The Rockefeller Foundation which has been misleading in its supposed effort to fight world hunger started 30 years ago when there were less than a million starving people on the planet. According to this eye-opening opus, the Foundation's true mission was to control political insurgency and population growth.

The upshot is that today there over 800 million people who go to sleep hungry daily, and the book blames the Rockefellers for using contributions to bankroll a ’massive global restructuring of agriculture’ which ’destroyed the livelihoods of millions of farmers and villagers that had been in existence for hundreds of years.’

The Revolution Will Not Be Funded indicates that ’critical to the success' of such schemes is the deliberate ’use of people of color as endorsers of these tactics.’ In sum, the sisters behind this enlightening expose’ earn high marks for compiling a critical inquiry into an unregulated industry long-presumed to be dedicated to the public interest, which unfortunately, more often than not, ostensibly functions as a pawn of big business and the ruling class.

Read South End Press’s description of The Revolution Will Not Be Funded: Beyond the Non-Profit Industrial Complex.