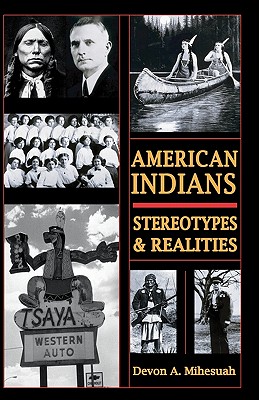 ’Accurate books about Indians have been written, yet misinformation abounds and inundates our children at an early age. Racist television cartoons which portray Indians as befeathered savages are still shown today as entertainment’ Textbooks continue to be inadequate. For example, students still learn in first grade that in 1492 Columbus ’discovered’ America and that for 500 years after this encounter all peoples of the Western Hemisphere have been content, despite the fact that this cultural encounter resulted in the most devastating holocaust the world has ever known’

Professors who teach this version of history evaluate Indians by non-Indian standards. They still frequently refer to Indians as ’savages,’ ’heathens,’ and ’red men’ without considering the Indians' side of the story’ [My] purpose is to correct some of the most prevalent misconceptions about Indians. It is important for all of us to recognize and combat stereotypes. All peoples deserve to have their histories and cultures properly placed in the scheme of things.’
’Excerpted from the Introduction (pages 14-20)

Between Hollywood movies and history books, most of our minds are filled with many misconceptions about Native Americans. For instance, the film The Last of the Mohicans gives the erroneous impression that that tribe has disappeared entirely. Meanwhile, the picture Pocahontas suggests that the 12 year-old Indian princess had a romantic relationship with a much older white man named John Smith, when they never married and weren't ever even lovers. An accurate account of what transpired would relate how he was one of the settlers who participated in the extermination of Pocahontas' people, the Powhatans.

Dr. Devon A. Mihesuah, a professor of International Cultural Understanding at the University of Kansas, also happens to be a citizen of the Choctaw Nation. And as the author of over a dozen books on Indigenous history, it has been her life's mission to set the record straight about Native Americans. In American Indians: Stereotypes & Realities she corrects 25 common mistaken notions, ranging from ’Indians had no civilization until Europeans brought it to them’ to ’Indians have no religion’ to ’Indians are a vanished race’ to ’Indians get a free ride from the government’ to ’Indians have a tendency towards alcoholism’ to ’Indians were conquered because they were inferior’ to ’indians have no reason to be unpatriotic.’

Consider the chapter debunking the stereotype of Indians as warlike, where the author matter-of-factly explains that they were understandably fighting ’to defend their lands, sovereignty and way of life from invaders.’ She goes on to point out that movies and history books have generally portrayed her people as wild savages, when it really was generals like George Washington and Andrew Jackson who were the bloodthirsty aggressors. But unfortunately, the ethnic cleansing on the part of the conquerors continues to be celebrated as great military victories instead of massacres.

A precious primer on Native Americans for anyone who can handle the truth about how the West was won.