Book Review: Russell Atkins: On the Life & Work of an American Master 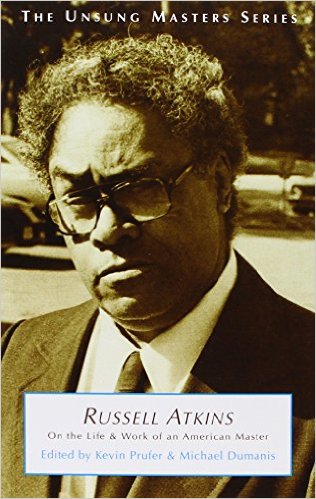 Read a Description of Russell Atkins: On the Life & Work of an American Master

This is an astounding tribute to one of the most innovative American artists, Russell Atkins, by a small, independent publisher, Pleiades Press. Prufer, a professor in the Creative Writing Program at the University of Houston , and Dumanis, a professor at Bennington College, put together this labor of love, paying homage to Atkins, this peerless yet largely unknown poet, composer, dramatist, theorist, and editor.

When I was a very young writer in Cleveland, I met Atkins at a performance at Karamu House, one of the oldest Black theatres in the nation. Along with renowned poet-playwright Annetta Jefferson, I learned from Atkins about the value of words and reading, the mechanics of composition and techniques, and which writers to study. Most Cleveland artists and writers respected Atkins for his uncompromising poetry, plays, music, and possibly the black-owned poetry magazine, Free Lance.

Now, Prufer and Dumanis are trying to revive interest in the enigmatic Atkins, who created some of the boldly original, courageous, important work as one of the most significant 20th century avant-garde innovators. Born in 1926 in Cleveland, Atkins studied music at seven and published poetry in leading journals and newspapers at an early age. His supporters of his poetry included Langston Hughes, Clarence Major, Marianne Moore, and others, noting his challenging concepts in form, meter, style, and content. He refused to pigeon-holed or submit to any ideology or movement. When he founded Free Lance, A Magazine of Poetry and Prose, in 1950, with his friend, Adelaide Simon, it attracted writers from all over the world, leading the now-defunct Black World to call it “the only Black literary magazine of national importance in existence.”

Supported by a generous collection of Atkins’ poems, there are a number of scholars and poets write about his unconventional, mathematical approach to verse and music, including Evie Shockey, Aldon Lynn Nielsen, Tyrone Williams, Sean Singer, and Tom Orange. They dissect his credo of total structural freedom, a tendency toward artistic mayhem and dissonance, varying images and rhythms between sound and silence, all designed to liberate the mind and imagination.

Now sweet Cathy
Is pouring beer here in a bar
Pouring beer in a bar
Where hard workers are.
Endure costs her; her dreams fewer,
Cathy with promoted bust is mature.
-from Now Sweet Cathy (1961)

Trained as a musician and visual artist, Atkins studied at Cleveland College, Cleveland Music School Settlement, Cleveland Institute of Music, Karamu Theatre, and Cleveland School of Art. In the 1955-1956 issue of Free Lance, he published his landmark article, “A Psychovisual Perspective for Musical Composition,” using the Gestalt theory of pattern formation to stress the importance of the brain rather than the ear as the critical element for composition. The music world took notice.

With his plays, The Abortionist and The Corpse debuting in 1954, Atkins seriously turned to poetry, producing several volumes including Phenomena (1961), Objects (1963), Heretofore (1968), The Nail (1970), Maleficium (1971), Here in The (1976), and Whichever (1978). All of his poetry, plays, and music collectively spoke as one of strongest avant-garde voices to appear in African American literature, and in our national world of letters, with some critics comparing him to the experimental work of jazz greats John Coltrane and Anthony Braxton.

When the editors approached Atkins about this project, the poet-composer said: “Why, who would want to read about me?” Well, meet Russell Atkins, an American original, whose works have been neglected and ignored. Learn about this unconventional elder and see why he turned the literary and music world upside down. This is a historic, intellectually challenging book to digest slowly and savor.

“I can personally attest to the truth of all that Robert says having known Russell Atkins. It is sad that black art is marginalized and not given the proper voice that it should have. If you had known Russell as all the young writers who came in contact with him did, it would leave you nothing short of amazement at the depth of his poetic thinking. He was powerful and not one of us can say that in some way he did not influence the way we approached not only the meter and tone of our poetry but more importantly he stretched our vision to go the way of Trane, go out there and see what could be twisted out of the normal way of looking and commenting on the world around us. Russell changed the compass of poetry in my mind to flip north and make it north'd or warm to her warm or love bones. These are additions to the normal way of seeing things like pouring shade.” —Anthony Fudge, 2012

Read Pleiades Press’s description of Russell Atkins: On the Life & Work of an American Master.